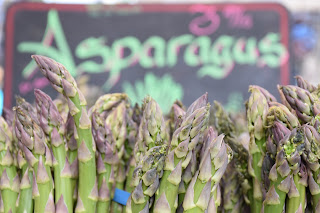 “Fat is where it’s at. Thin is not in!” was how farmer Alan Schreiber explained that asparagus with thicker spears is more tender than “skinny” asparagus. The greater girth gives fibers more breathing room. Farmer Manny Canales noted that the skinny asparagus is tougher because it works harder to stay upright in the spring winds of the lower Yakima Valley.

Another interesting takeaway from the day was that Washington’s asparagus varieties usually have dark purple “bracts” – those triangles on the sides of the spear. The “tip” of the asparagus is made up of lots of bracts. And the colder the temperatures, the more purple you should see in the asparagus. So, expect more purple in your asparagus in early April at the beginning of the season than at the end in June.

What should you look for when buying asparagus at your farmers market? According to Alan and Manny: 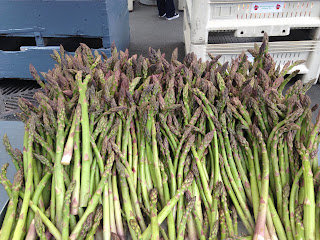 According to Alan, who is also the Executive Director of the Washington Asparagus Commission, when asparagus is super fresh, you can rub two spears together and they squeak. But, to keep the peace, don’t try this at the farmers market until after you’ve bought your bundle. That’s a tip from the market managers.

Once you have your fresh, fat, Washington-grown asparagus, you can steam, simmer, roast, grill, or sauté it. Asparagus is incredibly versatile. The snapped off ends are great for flavoring soup stocks!
Asparagus is great for you too: low fat and packed with nutrition, especially Vitamin A, Vitamin C, and folate.

Now’s the time to find Washington asparagus at a Washington farmers market. Enjoy! And remember: “Fat is where it’s at; thin is not in.”

Colleen Donovan is the Coordinator for the Farmers Market Integrity Project, a statewide collaboration of market managers, farmers, and industry leaders working to ensure transparency in local foods.

Posted by Washington State Department of Agriculture at 4:31 PM

On Tuesday, May 8, we conducted the first of three planned treatments to control gypsy moth in Pierce and Kitsap counties. Various questions about the treatment have been asked on social media both before and after the treatment. While we have responded to those concerns on various posts on social media, we wanted to provide a central location for information about two topics: a viral video and treatment on school grounds in Kitsap County.

During our treatment planning, we anticipated treating Cougar Valley Elementary school at 10 a.m., which is what we communicated to the school district prior to treatment.

Subsequent adjustments to the flight plan were necessary to manage flight restrictions over the Kitsap Naval Base and for the safety of the pilot. In order to avoid flying in the prohibited area, the applicator had to modify the initial flight plan. This meant that the pilot would arrive at the school sooner than initially anticipated. We indicated to the applicator that treatment should not start at the school until after 9:10 a.m. when classes would start and students would be inside. The pilot arrived at about 9:05 a.m. and began treating the school grounds. Some children were still outside when treatment began.

We worked with the Central Kitsap School District on Tuesday to inform parents, identify what happened, and provide revised information about when to expect treatments to start at the school. We have finalized a modified application plan by working with the base personnel to adjust flight time restrictions over the base. This will now allow us to treat the school grounds no earlier than 9:30 a.m., if future treatments occur on a school day. We have also communicated this revised plan to the school district.

Again, Btk, the product we use to treat for gypsy moth caterpillars, has an excellent safety record. More info about Btk and human health is available on our website. However, if anyone has health concerns from the treatment, they can contact the Washington State Department of Health at 1-877-485-7316.

A video which has now been viewed thousands of times makes several claims about the treatment in the Silverdale area. In the video, the individual claims that her animals are being harmed by the spray and she makes broad statements about the types of impacts the spray can cause. Here are the facts:


In addition to the video, this same individual has made other claims on social media both before and after the treatment.

Our agency has been working for over 40 years to prevent gypsy moths from becoming established and have used Btk many times for this purpose. Btk is also used commonly around the U.S. and the world to control caterpillars for gypsy moth treatments and on organic farms. We chose this product because it is both safe and effective. Our own staff members are always stationed in treatment areas, whether conducted by air or on the ground, and have the highest exposure to Btk. They have never reported any ill effects from exposure to this product.

While Btk has a long-term, excellent safety record and is even approved for use in organic agriculture, the risk that gypsy moths pose not only to the environment but also to human health is substantial. While we continue to protect our environment from this devastating invasive pest, our goal is always to provide extensive outreach so that the public is aware when eradication takes place.

Outreach this year has included news releases, social media outreach and education, public open houses, four postcard mailings to addresses in or near the treatment area, signs in the treatment areas and promotion of the ability to sign up for email, text, or robocall notifications to find out when treatments will occur. We are planning two additional treatments and encourage those who would like to know when they occur to sign up for these notifications.

Posted by Washington State Department of Agriculture at 3:42 PM

The Washington State Department of Agriculture (WSDA) has quarantined a King County facility near Redmond after a single laboratory-verified case of equine herpes virus EHV-1, non-neuropathogenic strain, was detected there.

This “wildtype” strain of EHV-1 tends to be less contagious than the neuropathogenic type.

On May 9, one horse at the facility tested positive for the disease. The horse is now isolated on the premises, and WSDA has quarantined the facility. The quarantine will last until 14 days after WSDA confirms no more signs of the disease and the horse tests negative.

The facility has cooperated fully with the quarantine order and is working to ensure strict biosecurity measures are in place. WSDA is tracing movements of horses off the premises and may issue additional quarantine orders if needed.

Given the infectious nature of EHV-1, WSDA urges horse owners to follow the recommendations below.

Watch your horse for signs of possible infection, such as:


Check your horse’s temperature twice daily, ideally first thing in the morning and last thing at night. Also, check before administering medications as some can lower body temperature.

Notify your veterinarian immediately if you detect any of the symptoms above. Your veterinarian may want to take nasal swabs for virus detection or blood samples for evidence of exposure to EHV-1.

When the virus is detected, WSDA and local veterinarians work closely with affected communities to ensure the best biosecurity standards are practiced. For more tips on keeping your own horses safe through good biosecurity practices, please see our previous blog post.

The time between exposure and illness from EHV-1 varies from two to 14 days. By self-quarantining animals with possible symptoms, practicing good biosecurity and contacting your veterinarian as soon as you suspect possible symptoms, you can help prevent the spread of this virus.
Posted by Washington State Department of Agriculture at 3:04 PM