What's up in your grill?

Have you ever looked at your vehicle’s grill and found a bee, butterfly or some other bug stuck there, unable to get out of the way as you cruised down the highway? Well, checking vehicle grills is just one of the less illustrious things our staff does at WSDA. Let me explain…

A primary way that many invasive pests enter Washington is by hitching rides when people move here from infested states, unwittingly transporting devastating pests into their new neighborhoods.
To protect our state, WSDA conducts periodic vehicle checks at weigh stations, collaborating with USDA Smuggling Interdiction and Trade Compliance and the Washington State Patrol.

Together, we conducted one such check last month at two different weigh stations: Liberty Lake and Plymouth. Between the two locations, a total of 167 inspections were performed, including inspections of 19 moving trucks.

One of the most common places to find invasive bugs is in the grill of the vehicle, and the inspected vehicles did not disappoint at this inspection. WSDA found Japanese Beetles – an invasive pest that has taken hold in the Eastern and Midwestern states – in the grills of several trucks.

But the grill isn’t the only place to find invasive pests, nor is it the most worrisome as those bugs are usually dead. Normally, the most threatening are items hauled from the infested location itself, like outdoor furniture. Some pests, like the gypsy moth, require a checklist to be completed if you are moving from a quarantined area to our beautiful state.

Luckily, no living invasive pests were detected in the latest operation. There were, however, several movers who either did not do the required checklist or whose checklists were incomplete.

If you or someone you know is moving to Washington from a gypsy moth quarantine area, make sure they check for gypsy moth egg masses and have their completed checklist. Everyone is welcome in Washington, but leave your bugs behind! 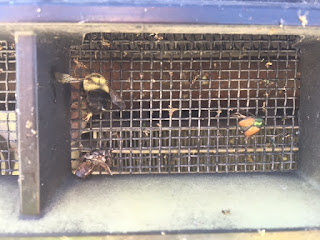 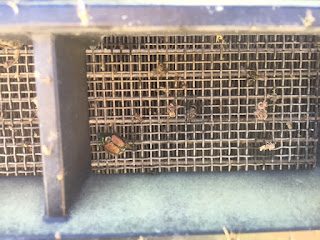 Special thanks to WSDA pest biologist Jenni Cena for the photos.
Posted by Washington State Department of Agriculture at 4:07 PM

Now you see it, now you don’t: Northeastern forests in the wake of the gypsy moth outbreak

Cruising along the freeway in Connecticut, lush, mid-summer leafy green forests suddenly changed:  green leaves were sprouting from the trees like springtime and light was streaming through what should have been shady forests.

I pulled off at the next exit and confirmed my suspicions: gypsy moth females laying eggs on trees at my first stop.

The defoliation of the Northeastern forests has been astounding. Hundreds of thousands of acres have been completely defoliated by gypsy moth caterpillars – for the second year in a row.

Driving through Connecticut, Rhode Island, and Massachusetts recently, I witnessed mile after mile of trees that, if not for the extreme heat and humidity, would have made one think it was March or April, rather than the end of July.

I didn’t go up in a plane, but I was able to obtain some aerial photos of the extent of the damage from the state agencies where the damage occurred: 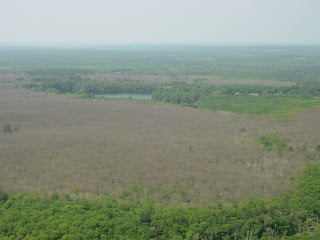 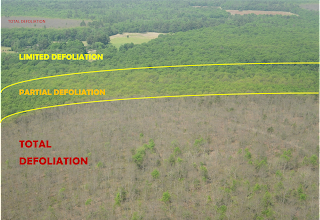 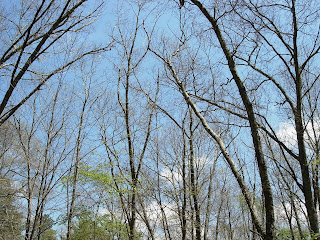 Unlike our local tent caterpillars and fall webworms, gypsy moths have the capacity to defoliate entire forests. It was something to behold and I was glad to have to travel across the country to see it, rather than witnessing this damage in our own forests.
Posted by Washington State Department of Agriculture at 10:15 AM

A Conversation with Miles McEvoy of the National Organic Program

As deputy administrator (aka Head Guy) for the USDA National Organic Program (NOP) and former program manager of WSDA's Organic Food Program, Miles McEvoy has a unique insight into both past and present of the organic industry in Washington state and nationally. His journey began as WSDA’s first organic inspector in 1988 and spans nearly 30 years of work in the organic certification world.

Recently, I had a chance to speak with Miles. Here are a few excerpts from that conversation.

Tell me a little bit about yourself.

I’ve been at the NOP since fall 2009. Before that, I worked with WSDA, from 1988 to 2009, seeing the change from about 63 farms that first year to the thriving organic industry that it is now.

What was the intention of organic certification originally?
The driver for Tilth was to protect farmers and create a level playing field and consistent standards.  Also consumers wanted to make sure that organic product really was organic.

Is that intention the same today?
Pretty much, in terms of the purpose of certification: to verify organic claims, to protect farmers so that they have a level playing field, and to ensure consumers that everyone selling organic products is meeting the same requirements.

What was the drive behind taking the standards to a national level?
Standards were very inconsistent between states and certifiers who didn’t accept one another’s certification. There were a lot of barriers to trade. The market started to grow significantly, and retailers and consumers also wanted a consistent standard.

What issues are most critical in organic today? How is the NOP addressing them?
There are supply constraints-USDA is doing many things to try to support the industry’s growth.We provide technical assistance through resources created for the Sound and Sensible Certification Initiative, cost share for organic certification costs, organic crop insurance, and conservation programs through Natural Resources Conservation Service (NRCS).

Where do you think the organic industry will go from here? What are the greatest barriers to its growth?
It’s growing strongly-there’s a lot of energy, vitality, and excitement. Organic products account for about 5-11% of sales—I think it will continue to grow. In terms of challenges, organic producers have unique soil management, pest, and disease challenges, so we want to ensure that good research occurs to continue to provide state of the art soil and pest management for the organic products being produced.

Where do you see agriculture in the next 20 years?
Farmers will more closely reflect the diversity of the US population.  More farms will provide food for local and regional markets. I see farmers, both organic and non-organic, becoming more sustainable in terms of energy use, inputs, and environmental impacts, and less use of toxic pesticides.  Organic is at the cutting edge of the trend towards a sustainable food system.

Posted by Washington State Department of Agriculture at 9:30 AM

Today, WSDA’s Organic Program certifies more than 1,100 organic operations in Washington state where organic fruit and produce have become staples in farmers markets and most grocery stores. But it wasn’t always this way.

In the 1970s, organic farming was still in its infancy in Washington and across much of the country. While farmers and gardeners were interested in alternative methods for crop production, information on organic cultivation was scarce and supporting organizations didn’t exist.

That began to change in 1974. Wendell Berry, farmer and poet, came to Spokane to speak at the ‘Agriculture for a Small Planet’ Symposium. With Wendell’s encouragement, a Washington-based group organized to promote organic agriculture. They called themselves Tilth, after the Old English tilian, meaning ‘till’ or 'strive for, obtain by effort.'

The Tilth Producers Cooperative worked on production, marketing, and distribution of organically produced crops. They also began a peer-based organic certification program, developing a framework for organic certification regulations by deciding which practices and materials were acceptable.

In the mid-80s, Tilth worked with Ken Jacobsen, a state representative from Seattle, on legislation to house organic certification within WSDA. As a result, the Washington Organic Food Products Act, Chapter 15.86 RCW, was enacted in 1985.

Organic certification formally shifted to WSDA in 1987. Organic growers fund the program directly through a fee-for-service model similar to other services WSDA provides.

The USDA’s first draft of the NOP standards in 1997 allowed irradiation, genetically modified organisms (GMOs), and sewage sludge in organic production. But protests from nearly 300,000 people nationwide prompted changes, and the Final Rule in 2002 prohibited these practices that became known as the “big three.”

In 2002, the WSDA Organic Program was accredited by USDA to provide certification services under the new federal standard, which continues today.

Of the first 100 farms certified by WSDA, 21 are still certified organic under their original name. Many others still farm, but have changed organizations or roles. Each of their stories, struggles, and successes helped create the path for the organic farmers and handlers of today.

Special thanks to Mark Musick, Anne Schwartz, and Diane Dempster, who have worked with Tilth Producers for many years, and Organic Program manager Brenda Book, for their input on this article.  Without their tireless efforts, Washington organic production would not be what it is today.

Posted by Washington State Department of Agriculture at 12:26 PM

As part of the recognition, Governor Jay Inslee has issued a proclamation acknowledging the significance of organic agriculture to our state and highlighting the growth of certified organic Washington farmland—more than 93,000 acres today!

WSDA’s Organic Program is the oldest and largest state certification program in the country. Supported by fees from certified operations, the Organic Program currently certifies 1,160 organic growers, handlers and processors of organic products, and registers 850 input materials for use in organic production.

Washington organic continues to thrive, producing more than 93 percent of all the organic fresh apples in the nation, and 94% of organic sweet cherries. On top of that, our state’s certified organic farmers lead the nation in producing organic pears, hops, blueberries, and more!

During the week, we’ll share information on our social media sites that raise awareness, educate consumers, and help farmers. We’ll use the hashtag #WAOrganics so you can follow along.

If you’d like to learn more about organic agriculture, visit our Organic Food Program website or Tilth Producers, which is also supporting the weeklong WOW! event.

Posted by Washington State Department of Agriculture at 9:59 AM