A couple years ago, LINC Foods of Spokane teamed up with specialty crop partners in Idaho and Montana to compete for funds available through the U.S. Department of Agriculture’s Specialty Crop Multi-State Program.

As the lead for partners from Washington, Idaho and Montana, LINC Foods received a $300,000 grant focusing on food safety. LINC is a worker and farmer-owned cooperative business that calls itself “a one-stop shop for local, sustainable food.”

The competition was tough. Out of 11 proposals that WSDA reviewed and forwarded on to the USDA, LINC’s was the only one awarded a grant. USDA only awarded funds to four multi-state projects across the U.S.

This year, WSDA is one of some 20 states that will again act as the “administrator” of selected multi-state projects under current USDA Agricultural Marketing Service (AMS) competition for new projects.

Specialty crop programs are funded through the 2014 Farm Bill. This round, some $7 million in federal funds are available to boost the specialty crop industry.  Specialty crops include fruits, vegetables, tree nuts and nursery crops. Washington ranks second nationally for producing specialty crops.

We hope to have one or more of Washington’s applications be selected in this current round. Projects can address regional or national-level specialty crop issues, and deal with food safety, plant pests and disease, research, or projects addressing common issues specific to specialty crops, such as marketing and promotion.

Posted by Washington State Department of Agriculture at 2:56 PM

On a sunny Monday morning, a white van pulled into the driveway of Sno-Valley Mushrooms, a family-owned farm nestled in the countryside of Duvall, Washington. Tomas Guzman, Kara Rowe and Kristi Gorenson emerged, taking in the picturesque surroundings and making introductions as they set up their camera equipment.

The three Washington Grown crew members were at the farm to film an installment for its fifth season. The show, which tours various agricultural sites and provides recipe how-to’s, is part of an agricultural promotion initiative supported by the Washington Farmers and Ranchers (WFR).

Washington Grown has been airing since 2013, but already boasts several accolades. Kristi received a Northwest Chapter Emmy nomination in 2015, and the show received both a Silver and Bronze Telly Award. In addition, Washington Grown received an Emmy for its episode on sweet corn.


The team first completed a walk-through, coordinating their shooting plan and familiarizing themselves with the farm’s workflow.

“This is where the ‘shroom magic happens,” owner Will Lockmiller joked.

The crew met the workers bagging the nutrient-infused sawdust compound for Shiitake, Tree Oyster, and Lion’s Mane varieties, to name a few. 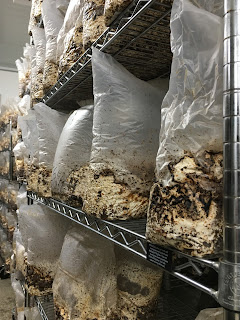 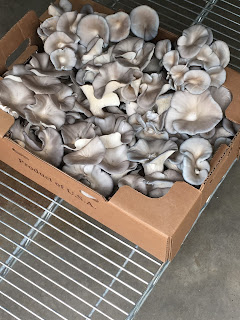 Left: mushrooms are ready for the farmer's market. Right: mushrooms grow in bags in the farm's lab facility.

After head camera operator Tomas readied his equipment, producer Kara put a mic on host Kristi. Will and Rowan were also mic’d during the shoot, both of them guiding Kristi through different parts of their facility.

The Washington Grown crew had a lot of ground to cover and not much time to do so; the call sheet only allowed two hours for filming at this location. The Sno-Valley Mushroom shoot was one of two video shoots that day, not to mention one of many that would take place during the week.

But the day’s tightly-packed itinerary was not overestimated; the crew was on-schedule throughout the morning, and moved through scenes at a steady clip. Tomas zoomed around the farm with his camera, directing the owners as needed. Kristi guided the interviews, asking questions and letting the owners talk excitedly about their business model and mushroom-growing expertise.

Kara mic’d interviewees as necessary and had a list of points to cover. She referred to it once, but between the owner’s engaged descriptions and Kristi’s questions, everything was covered. “She’s really a pro at this,” Kara said, tucking the list back into her pocket.

Shortly after noon and right on schedule, Tomas got one last shot of Kristi, Rowan, Will, and two of Will’s children, who piled onto a tractor and said goodbye to the audience. The camera and sound equipment was loaded back into the van, and the crew was off to their next location.


Visit Washington Grown’s website for more information, including recipes and the station schedules when you  can and how to watch the show.
Posted by Washington State Department of Agriculture at 10:51 AM

Carts were prepared, tarp was laid down, and a safety meeting was in full swing by 8 a.m. Customers weren't scheduled to arrive for another two hours, but WSDA's waste pesticide collection event crew had been at the Seattle location since before 7:30 a.m.

A lot of preparation is involved before a waste pesticide collection takes place. Chemists and contracted laborers have the process down to an exact science.

Every chemical expected during the event is charted beforehand. Avoiding spills is always important, but the stakes are higher when the materials involve toxic chemicals like acids or long-banned pesticides like DDT.

Those who handle the chemicals suit up in bright yellow safety suits, taping sleeves around their wrists and pants around their ankles. Rubber boots, protective gloves and respirators add additional protection for the workers.

Others working at the event wear bright safety vests and must attend a pre-event safety meeting. Eventually, vehicles will be guided, one by one, to the unloading zone, which is taped off and covered with plastic tarp.

The program works to properly dispose unused or unusable pesticides, prevent the use of cancelled pesticides and provide education and technical assistance as needed. If unwanted pesticides aren’t collected properly, containers can age, potentially leaking hazardous chemicals into the environment.

At the June 20 collection event in Seattle, 32 customers were scheduled to bring up to 8,000 pounds of pesticides for disposal. Preparing for their arrival began early with WSDA staff and employees from Clean Harbors Environmental Services, the disposal contractor, placing the sheets of plastic on the ground and duct taping them to prevent slippage.

The first vehicles began to arrive about 9:30 a.m., carrying a wide variety of pesticide products.

Unloading and packing these pesticides is meticulous work. Each can, bottle or box of chemicals was cross-referenced with the previously prepared chart. Customers had to provide the names of pesticides being unloaded and, if they couldn't, the contents were recorded as “unknown.”

Waste pesticide workers then wrote down the chemical’s code number and re-packed it into one of many large drums. The drums were placed in a Clean Harbors truck for transport to Utah, where they will be safely incinerated.

WSDA's waste pesticide collection events are held around the state at various times of the year. Visit www.agr.wa.gov/wastepesticide for more information about the Waste Pesticide Program and how to sign up for future collection events.

Posted by Washington State Department of Agriculture at 12:53 PM