Farm to food pantry – getting fresh produce to hungry people

For the past three years, WSDA’s Food Assistance Programs have been managing a pilot program with the goal of getting more fresh produce into local food banks, while at the same time connecting local farms to the non-profits feeding the hungry in their communities.

Through the Farm to Food Pantry pilot program, WSDA has provided grants to food banks that, in turn, use the money to buy produce directly from local growers. Recently, the Food Assistance Programs staff partnered with the Washington State Dairy Council to conduct a tour of one local farm providing fresh produce to a local food pantry to showcase this effort.

The Dairy Council produced the brief video of the tour, featured in this article, which includes remarks from WSDA Director Derek Sandison and Deputy Director Kirk Robinson.

In 2015, the Farm to Food Pantry program provided $14,000 in grant funding to six food pantries in Snohomish, Chelan, King, Okanogan, Clark and Stevens counties. Rotary First Harvest of Seattle was contracted to coordinate the distribution of these funds and local operations.

Most of the organizations also obtained matching funds from private groups, in some cases doubling the amount of funding they received. More details on the pilot project with feedback from the participating food banks are included in the “2015 Farm to Food Pantry Purchasing Report.”

Posted by Washington State Department of Agriculture at 12:31 PM

Safeguarding food and animal feed one of WSDA's key duties

Protecting Washington’s food and animal feed supplies is one of the most important responsibilities of our agency. With human and animal food systems becoming more globalized, public health jurisdictions value partnerships, collaboration and sharing resources to protect consumers.

We represented our state’s animal feed regulatory program and our Washington Rapid Response Team at last month’s annual meeting of the Association of Food and Drug Officials (AFDO) in Pittsburgh. Often called Washington RRT for short, our team is composed of animal feed and food safety professionals. 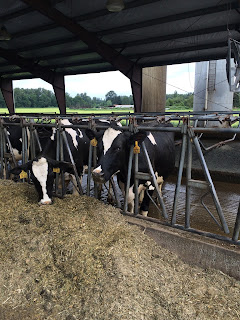 With our peers, we discussed ways to minimize the number of illness outbreaks related to food and feed products. Speakers from the U.S. Food & Drug Administration and U.S. Department of Agriculture played a big role at the conference, updating us about federal efforts to strengthen consumer protections.

Hot topics included the Food Safety Modernization Act (FSMA), multi-agency rapid responses to food and feed emergencies, and disease-preventive controls for human and animal food.  Representatives from the food industry provided their perspectives on new food and feed regulations and the steps they are taking to comply with federal implementation dates under FSMA.

The conference dealt with a host of topics including Whole Genome Sequencing, trends related to marijuana-infused products, avian influenza and produce safety. Of particular note was discussion related to a nationally standardized training curriculum for food and feed regulators, a venture lead by the International Food Protection Training Institute in collaboration with federal and state partners.

AFDO workshops included writing documents under pressure, communicating with the news media during foodborne illness incidents and a leadership development workshop. Many of the presentations are available on the AFDO website.

The world of food and animal feed regulation continues to evolve as products become more complex and are distributed to a wider consumer network. Implementation of new regulations such as FSMA will be a considerable undertaking. Regulatory and food industry partners are taking an active part in shaping a modern integrated food and feed safety system.

We believe that outreach to the food industry and other regulatory bodies, getting to know our partners, and sharing information on best practices will help prevent outbreaks and improve response our time in emergencies.
Posted by Washington State Department of Agriculture at 10:13 AM

Hunting gypsy moth on a military base

The Asian gypsy moths caught in the Lacey and Nisqually areas in 2015 created some challenges for the gypsy moth trapping program this season. There are large areas of the high intensity trapping grid being used this season that fall in areas that are not easily accessible. One of those areas is Joint Base Lewis-McChord.

We have trapped on base before, but the grid for trap placements developed this season has taken us into new territory that requires careful planning to keep our trappers safe. In order for our trappers to get into these areas without being hurt or arrested, the supervisors in this area, Tracy Shirek, Kirstin Johnson and Don Kitchen, are pre-arranging access and sometimes escorts into the military training areas.

I had the opportunity to ride along with Kirstin and trapper Alicia Johnson (no relation) one day while they placed traps on JBLM. Within the first 2 minutes of entering military property, we were greeted by the military police wondering what we were doing. Thankfully, Kirstin had prearranged our visit and the right people knew that we were authorized to be there. We were able to move on our way to place the first trap.

It was an interesting morning of navigating narrow gravel and dirt roads, following the grids on maps.me (the mapping app all trappers have on their phones), as well as making sure we didn’t cross into JBLM areas for which we did not have prior authorization. It was a productive morning of Alicia hanging the traps, and Kirstin navigating the roads while I played the back seat driver role handing Alicia her pre-made traps at each stop. Great day in the field with great team work!

Posted by Washington State Department of Agriculture at 11:05 AM

It’s not every day that my job lets me leave the office, trek to the top of a mountain overlooking the San Juan Islands and do a live Twitter cast.

Even better, I spent the day with Kathleen Patton, a WSDA trapper who exemplifies the fine work trappers are doing around the state to search for gypsy moth and also happens to be a kick in the pants.

A trapper with WSDA for 10 years, Kathleen has the unique challenge of trapping on Washington’s islands. I tagged along to see what gypsy moth trapping is like…island style.

One of the challenges of island trapping became apparent immediately: the ferry. I had to hop the 6 a.m. ferry from Anacortes and ride more than an hour before we reached Orcas Island. After disembarking, Kathleen and I made our way to the east side of Orcas Island, where we would be trapping for the day.

Having trapped the island for several years, Kathleen already knew where she would place many of the traps – down to the tree – even without the map that WSDA provided. She quickly went from one trapping location to another, rarely needing to consult her map.


Technology has changed trapping, Kathleen said. At one time, trappers marked maps by hand, but those days are long gone. Now, as soon as she sets a trap, Kathleen gets on her iPhone and logs the location by GPS. This is automatically uploaded into a statewide mapping system that gypsy moth program staff can review to see where the traps are and the last time the trap was checked.

But some things never change, such as Kathleen’s thoughtfulness in placing the traps. At one stop, a trap was needed on an old, beautiful tree. Kathleen made sure to put the trap on the back of the tree so the trap would not show up in photographs people would take of the tree.

At the top of Mt. Constitution, Kathleen agreed to do a live video broadcast on our Twitter account about gypsy moth trapping on the islands. Wandering around to find at least a few bars of reception on my cell phone, we settled on a beautiful spot overlooking the water. Kathleen was a natural and may have a future in broadcasting, as she did an excellent job explaining gypsy moth trapping, even responding to questions that viewers asked on the fly. Click here to watch the recorded broadcast.

As we continued along, setting about 40 traps that day, Kathleen’s passion for the islands and her dedication to protecting them from invasive species like the gypsy moth was evident. She told me all about the island and island life as we wound through steep and unpaved roads that she knew well, even pointing out a plant that had become a problem on part of the island.

Before long, trapping for the day was over. Kathleen had to catch the 3 p.m. ferry back - the next one stopping at her island would not get her home until 7 p.m. One thing I definitely learned was that when trapping on the islands, you live by the ferry schedule.
Posted by Washington State Department of Agriculture at 1:14 PM


Wine, beer, cider and spirits are as much agricultural commodities as potatoes, apples and beef. As such, developing export opportunities for these products is important to the state’s economy and this industry sector.

Did you know that a boom in popularity of Italian foods is driving increased sales of red wine in Japan? And with half of Vietnam’s population under age 50, young, trend-seeking consumers are looking for new products, such as craft beers.

These were just a couple of the demographic and cultural factors presented by WSDA’s in-country marketing representatives. Each spoke about strategies to place Washington beverage products into overseas markets. They are:


Along with data about market share and growth trends, these representatives offered insights into the prospects and challenges of exporting to each country. For instance, Korea is half the size of Washington state and has seven times the population. Drinking, Danny said, is an important part of social life, doing business and celebrating special occasions.

While hard cider is becoming popular in the U.S. and especially in the Pacific Northwest, it’s not familiar to Asians. Because it’s made from fruits, Francis said there’s confusion about what it is – a vinegar, or used for cooking? He suggested cidermakers could use tasting demonstrations to establish it as a drink.


Other summit presenters covered topics such as taxes and tariffs, managing the risks of international payment and preparing your business to be ready for export.

About 25 company representatives attended, including wineries, breweries and cideries. By a show of hands, most are not exporting their products now.

Morning one-on-one meetings with WSDA’s market representatives, the afternoon summit and follow-up networking reception, all held at McMenamin’s Anderson School in Bothell, armed these companies with resources and information to develop export strategies and grow their sales.

The International Marketing Program webpage has more information on the program and how its staff can help businesses enter the export market. Contact them to be informed of future workshops and events.
Posted by Washington State Department of Agriculture at 10:00 AM

This year the East Coast is experiencing a particularly bad attack of the gypsy moth caterpillars. Anyone looking for reasons to keep the gypsy moth out of Washington need only do a quick search on social media for “gypsy moth” and check out the numerous posts, photos, and videos of the problems this pest is causing.

Here is just some of what you will find:

Photo by Gill Allen:  “A winter's sunset in Summer (the gypsy moths have striped the trees of their leaves)!” 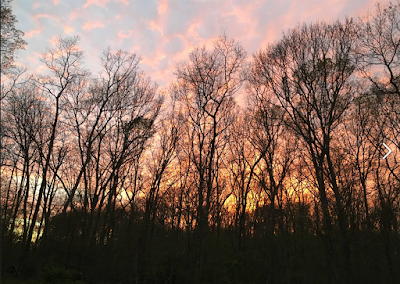 A video of trees stripped from gypsy moths 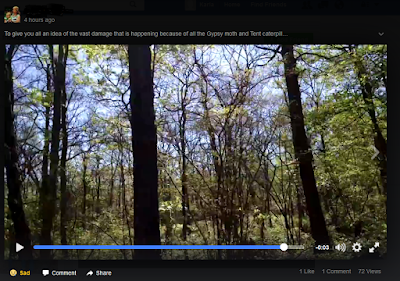 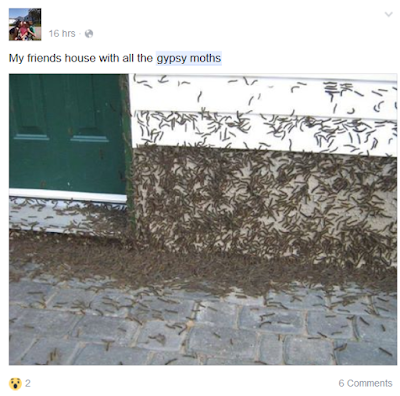 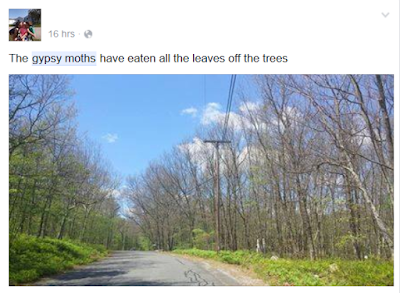 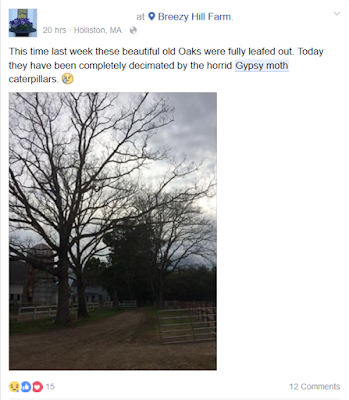 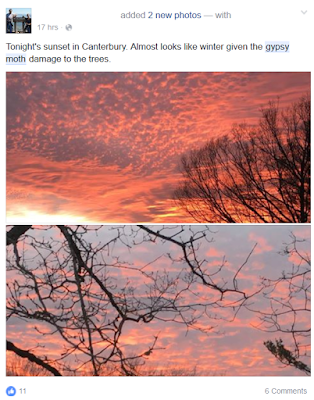 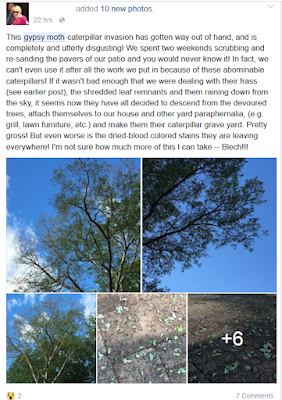 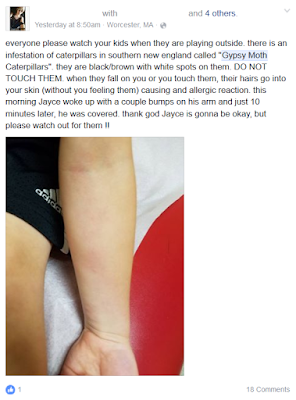 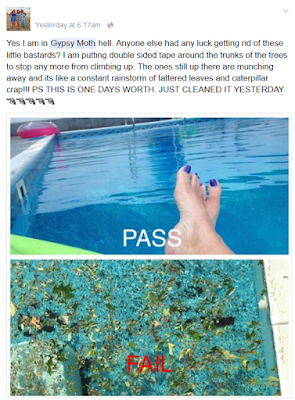 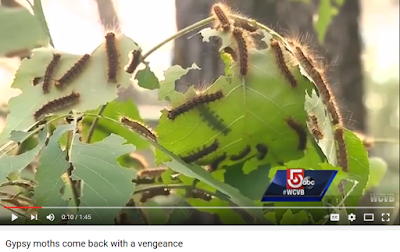 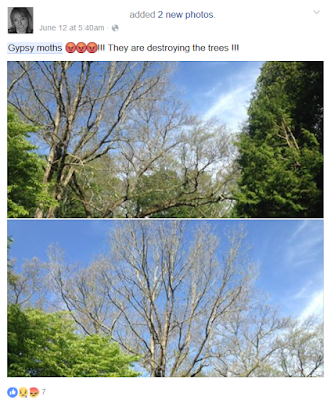 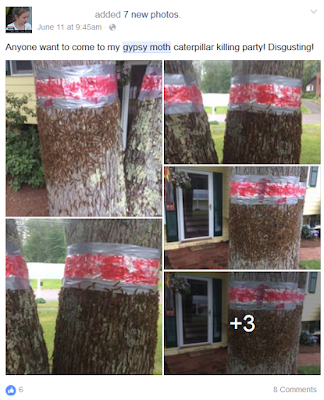 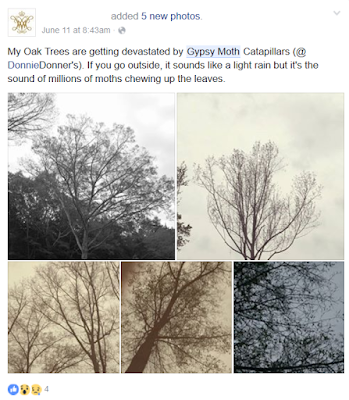 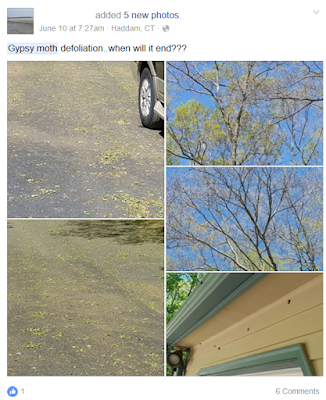 Posted by Washington State Department of Agriculture at 9:29 AM