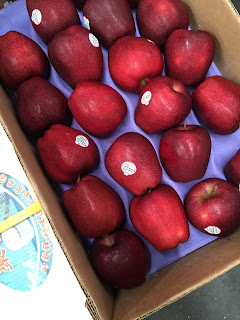 For farmers, ranchers and those producing food and drink in Washington, international markets are crucial to maintaining a robust agriculture industry.

Washington exports about 30 percent of the food and agricultural products produced here, and the third largest market for our products is China. This is one reason WSDA is closely following developments regarding increased tariffs proposed on some imports from China, followed by the response from China to impose higher tariffs on 128 U.S. products.

Eight Washington agricultural products are on the list China has marked as subject to higher tariffs. Together, those products generated $120 million in revenue in 2017 in exports to China alone. Statistics in both charts below are based on the calendar year and are estimates based on data from World Trade Atlas.

Top 10 exports to China in 2017
Like others in the agriculture industry, WSDA will continue to monitor the developing tariff situation. The negotiations on the North American Free Trade Agreement (NAFTA) and the recent completion of the Comprehensive and Progressive Agreement for Trans-Pacific Partnership (CPTPP) agreement without U.S. involvement are also expected to affect the agriculture industry, both in Washington and around the county.

With trade being so crucial, WSDA will continue to work with the agriculture industry and our federal partners to make sure that the voice of farmers, ranchers and food producers is heard.

Work also continues on maintaining and developing export markets for our state. Members of the WSDA International Marketing Program are already scheduled to participate in two trade activities involving China - one in May and another in June.
Posted by Washington State Department of Agriculture at 10:57 AM

With this one-time funding, WSDA will resume activities such as processing applications to participate in the program. It will also allow the agency to recruit for an IHRP coordinator to oversee the program. That position has been vacant since June 2017.

The IHRP was created in state law in 2016 with a one-time appropriation to get the new program up and running. WSDA was given authority to establish and collect fees to finance it into the future.

During the first growing season last year, WSDA issued seven licenses. The revenue generated by those fees alone was not enough to sustain the program beyond the first year. The agency continued to accept license applications, but has not collected fees or processed any applications.

“With this legislative funding, we can continue to serve the industrial hemp pioneers in our state for at least the next year,” said Jason Ferrante, assistant director of WSDA’s Commodity Inspection Division.

Ferrante noted that WSDA will assess participation in and financial support of the program through this spring and summer. Ultimately, Washington’s industrial hemp needs to be self-supporting, which may involve adjusting the fee structure.

Ferrante said WSDA will respond to customer feedback by simplifying the application forms. The agency will also provide more resources for potential applicants, such as the Liquor and Cannabis Board map of marijuana growing locations since industrial hemp cannot be grown within four miles of marijuana.

Of the 2017 IHRP licensees, the four licensed growers planted 180 acres of industrial hemp. One license was issued for seed distribution and two were some combination of processing, marketing, and growing.

Industrial hemp has many potential uses. It is primarily grown as a source of fiber for textiles, rope, paper and building materials. Hemp seed is used for food and oil. The plants can be a source of livestock feed and bedding.

As a cannabis plant, industrial hemp is considered a controlled substance under federal law. However, the 2014 farm bill authorized state agriculture departments to oversee growing the crop for research purposes. With legislative approval in 2016, WSDA launched the program, adopted rules and began processing licenses.
Posted by Washington State Department of Agriculture at 8:50 AM

A deadly virus that infects both domestic and feral European rabbits has been detected in British Columbia, and is good reason for owners of rabbits or fair managers with rabbit shows to take extra precautions this year. It is not known how this new rabbit hemorrhagic disease (RHD) serotype virus 2 would affect native North American wild rabbits.

The Canadian Food Inspection Agency (CFIA) reported the detection of rabbit hemorrhagic disease (RHD) serotype virus 2, or RHDV2, on March 8. Rabbit deaths were reported on Vancouver Island, and there are tests in progress to determine if this disease has spread to the Canadian mainland. Officials in Canada are currently reviewing a vaccine for RHDV2, but there is no vaccine available in the U.S. 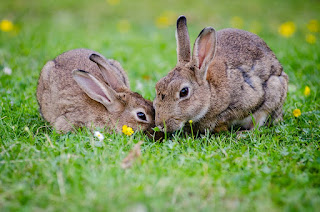 Rabbit hemorrhagic disease, or RHD, is easily spread among rabbits, causes a high rate of infection and death, and the agent (calicivirus) is very stable in the environment. The first signs of the disease can take up to nine days following infection, but affected rabbits can also develop a fever and die within 12 to 36 hours.

European rabbits have been shown to be affected by RHD and are the type of rabbit most commonly used as show animals by 4H, FFA and other hobby groups. The rabbits that died in British Columbia were European rabbits that had gone feral. It is not known how the virus would affect native North American rabbits, which are typically cottontail and jack rabbits.

Since there are no vaccines currently available in the U.S. for the virus, the best way to protect your rabbits is by practicing good biosecurity, including good sanitation and disinfection, and keeping new rabbits separated from your existing flock.

With fairs, shows and exhibitions coming up soon, there is always the concern that someone could bring an infected rabbit from an area where the disease has been reported.

Remember that a certificate of veterinary inspection must accompany all animals entering Washington State, including rabbits.

Rabbits can shed the virus in urine or feces for as long as four weeks after infection. It can be spread on contaminated food, bedding, fur and water, or by direct contact with infected animals or contaminated objects. Rabbits can become infected through oral, nasal, or conjunctival routes in the eyes.

While the disease does not affect humans, it can be spread through contaminated clothing or vehicles, or other animal handling equipment. Biting insects, birds, rodents, and wild animals can also spread the virus. The virus can survive for long periods of time in the environment and remain infectious to animals.

Signs of infection in rabbits include:
If you notice any of the symptoms listed above, contact your veterinarian. Rabbit hemorrhagic disease must be reported to state or federal authorities immediately upon diagnosis or suspicion of the disease.

To report a diagnosis or an unexplained increase in deaths among rabbits, you can contact WSDA at 360-902-1878 or 1-800-606-3056. Wild rabbit die-offs can be reported at wildlife.health@dfw.wa.gov or by visiting www.wdfw.wa.gov/conservation/health to file a report online.

Rabbit hemorrhagic disease in the RHD form has occurred in the U.S. before, back in 2000 in Iowa and in 2001 in Michigan, New York and Utah. However, the outbreaks were restricted to small groups of affected rabbits. RHDV2 has never been reported in the U.S.
Posted by Washington State Department of Agriculture at 3:09 PM

Keeping out invasive plant pests and diseases is a challenge for every country, especially since so many plants and plant products are shipped around the world every day. Whether it is timber products going to China or Christmas trees to Mexico, hay to Japan or seed potatoes to Uruguay, it must all be inspected and certified before it can be shipped.

WSDA’s Plant Services Program has 10 environmental specialists who conduct export inspections of Washington plants and plant products bound for market in other states or overseas. These specialists focus on ornamental plants, and fruiting shrubs and trees, which carry a higher risk of moving live pests, as well as agricultural products like timber, hay and grain. WSDA has a separate program, Fruit and Vegetable Inspection, that focuses on inspecting edible produce.


Most countries – including the United States - require a phytosanitary certificate, or “phyto,” before plant products are allowed in. An inspector in the country of origin issues the phytos once they have determined a product meets the requirements of the importing country.

While many of the international shipping inspections are done by the United States Department of Agriculture (USDA), a lot of them are done by WSDA inspectors who are trained, tested and licensed by USDA to issue international phytosanitary certificates.

The inspectors with the Plant Services Program work in log yards, vineyards, nurseries, packing warehouses, or out in growing fields. Growing season inspections are timed to match when disease symptoms will be most noticeable. So tulip bulbs are inspected for viruses during flowering, and grape plants are inspected twice, for early spring and late summer viruses. Logs, lumber and grains can be inspected year-round.

Inspectors examine plants for symptoms of viral, fungal or bacterial infections, or for signs of insect infestation. Sometimes, before they can be certified for export, plants must be tested and found free of specific diseases. Some products, like lumber, may need to be treated with heat or chemicals to ensure that there are no live pests hitching a ride.

From incredibly destructive insects like the Japanese beetle and gypsy moth, to diseases that can wipe out entire crops, the goal is to do all we can to keep intruders from invading new territory.

Every country has their own requirements for the import of plant products, and they vary greatly by the type of plant, and what part of the plant is being shipped. Inspectors refer to the Phytosanitary Export Database, which lists official plant health requirements for all countries, to determine whether the products are in compliance with the importing countries’ rules.

WSDA Plant Services inspectors issued 29,584 export certificates for foreign countries in 2017. The goal of state inspectors is to help shippers meet all export requirements so the shipping process goes smoothly and Washington plant products continue to enjoy a reputation for high quality and desirability.

Posted by Washington State Department of Agriculture at 8:44 AM