Come One, Come All

WSDA’s team of gypsy moth experts has been trekking around the state holding gypsy moth “Ask the Expert” open houses, and we still have three more open houses if you haven’t gone yet!

At the open houses, you can get all of your questions answered about WSDA’s proposed gypsy moth treatments for the spring of 2016. You have the opportunity to speak with people like Dr. Jim Marra, the Pest Program manager for the WSDA. But we also have trappers and others involved in the gypsy moth program who can answer your questions.

In addition to WSDA staff, the Department of Health is available at most open houses. They are answering questions about Btk and your health.

Finally, don’t miss the chance to watch WSDA’s newest gypsy moth video. It’s only 10 minutes long and gives you tons of information about why gypsy moth is such a bad pest.

Posted by Washington State Department of Agriculture at 3:20 PM

Love is in the air - literally

I wish I could take credit for the idea for this blog, but it was actually inspired by an article that arrived in my inbox, written by Todd Whitcombe. His article describes the chemistry of attraction in animals – and he used the gypsy moth as an example. Being that it is Valentine’s Day, I just couldn’t resist talking about l’amour for the not-so-beloved gypsy moths.

Reading the article taught me a few new things about gypsy moths and their mating practices. For example, did you know:
The ability of the male gypsy moth to find the female gypsy moth to reproduce is nothing short of amazing. This heightened skill, however, is also one of the reasons why they are such a problem.

When you factor in that a female moth can lay up to 1,000 eggs, it is easy to see how just a couple of moths can rapidly grow to populations that will devastate forests and the environment.

The ability to effectively and rapidly reproduce is just one of the reasons why it is critical that Washington eradicate gypsy moths when they are detected. Visit our website to learn more about WSDA’s gypsy moth trapping and control efforts, and consider attending one of our upcoming open houses for more information!

Posted by Washington State Department of Agriculture at 4:26 PM

If you have heard about our proposed gypsy moth treatments – which include applying a biological insecticide over some residential areas – you are bound to have questions and possibly some concerns.

That is why the Department of Agriculture is holding seven open houses over the next month and making our experts, and some from other agencies, available to answer your questions and address your concerns about the treatments proposed for this spring.

Why Attend an Open House

Here are 8 reasons why you should attend an open house: 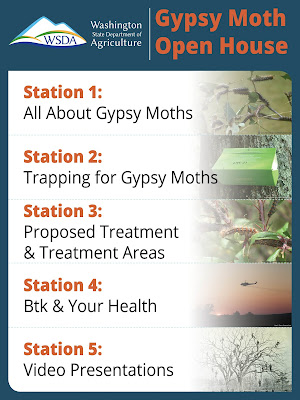 You have several opportunities to attend an open house:

After attending an open house, you’ll know more about WSDA’s proposed treatment and our plan of action. WSDA believes this proposal is the best choice to protect our environment from gypsy moths while being safe for you, your family and pets. Visit our webpage agr.wa.gov/gypsymoth any time for the most recent information on this project.
Posted by Washington State Department of Agriculture at 4:54 PM

On the Road with the Gypsy Moth Team

I entered a strange new world today – the world of monitoring for gypsy moths. Today’s mission: to boldly go where no gypsy moth sterile egg mass had gone before. Don Kitchen, an entomologist with our Pest Program, was captain of this mission and he let me tag along to see what it was all about.

An egg mass is just what it sounds like – a fuzzy, mass of gypsy moth eggs that look a lot like piles of brown to cream colored cotton. We use them like a kitchen timer – when the caterpillars on a monitored egg mass begin to emerge, it’s a good sign that egg masses we haven’t found are also starting to hatch.

On a gray, rainy day, we drove south to Vancouver, where Don stopped to scope out potential locations, looking for one that was easy to reach but hidden from passersby.

After finding an ideal spot, Don stapled the egg mass to the tree.  Ease of access is important as Don will visit the sterile egg mass every three weeks. He’ll watch for signs that it is swelling – an indication that the eggs are almost ready to hatch. When this happens it is time to start treating the area for gypsy moth.

Egg mass monitoring provides the most reliable information about when caterpillars will emerge. An especially warm spring, for example, will result in earlier hatching of the gypsy moth caterpillars and require earlier treatment.

After stapling the egg mass to the tree, Don pulls out one of his secret weapons: Tanglefoot.

Tanglefoot is a sticky product that is put around the egg mass. If any newborn caterpillars try to crawl away from the egg mass before it is removed, they get stuck in the surrounding sticky goo. Our goal is to protect Washington from a gypsy moth infestation, so we don’t want any wandering off.

Before Don put the egg mass in place, it was sterilized.  Sterilization provides another assurance that should caterpillars miraculously escape even the sticky trap, they won’t be able to reproduce.

Once the sticky trap is set, Don records the egg mass location. A GPS app on his cell phone allows him to map it. The app feeds back into an extensive mapping program that the Pest Program maintains. Not only do they track egg masses, but later in the year they also track where they place thousands of traps around the state and where gypsy moths are detected.

With the egg mass placed and logged, it was time to pack up and head home. Now we'll wait to see how that egg mass develops and when it signals to the world that, "The caterpillars are coming!"

Don’t forget to visit agr.wa.gov/gypsymoth to learn more about this pest and our efforts to keep it out of Washington State.
Posted by Washington State Department of Agriculture at 12:25 PM