Not sure where a thorax is on an insect? How about an abdomen? See the Asian giant hornet diagram at the end of this blog. It will help you identify different body parts of the insects discussed below.

These native pollinators can be colored black, yellow, and orange, and are most easily distinguished from the Asian giant hornet by their round, stout bodies and very fuzzy appearance. A queen bumble bee can be large, almost an inch in length, and they make a noticeably loud buzzing when they fly. However, there is little reason for alarm! Bumble bees are non-aggressive regardless of size. Bumble bees are important pollinators in Washington’s farms and wild ecosystems. You can often see the bumble bee’s collected pollen carried in yellow and orange lumps on its back legs.

Sawflies can have a very bee-like or wasp-like appearance, but there’s good news – they are all are non-venomous and can’t sting! The Cimbex sawflies are some of the largest sawflies in the state and can be up to 1.25 inches in length. The elm sawfly (Cimbex americana) and the Pacific sawfly (Cimbex pacifica) can be black and yellow, or black, yellow, and reddish-orange, with darkened wings. Their stripes can seem very similar to Asian giant hornets. The easy way to tell these sawflies from wasps is their clubbed bright orange or yellow antennae. Clubbed means they are expanded at the ends, kind of like a Q-tip. Sawflies are plant-eaters – the young feed on leaves, while the adults can sometimes be found chewing on wood or feeding on the sap of trees.

Most of Washington’s yellowjackets are native species that are common during much of the year. Unlike Asian giant hornet, Washington’s Vespula and Dolichovespula are clearly yellow (or white) and black, but not orange. They have distinctive patterning across the head and thorax, while Asian giant hornet is completely orange on the head (except for its black eyes) and almost completely black on the thorax. Yellowjackets can sting, especially when swatted or stepped on. However, these insects are beneficial to the ecosystem as pest control– they feed on many common agricultural plant pests.

This common, native wasp can be very large, sometimes reaching over an inch and a half in length. The western cicada killer (Sphecius grandis) and the Pacific cicada killer (Sphecius convallis) are both mostly rusty-orange in color with yellow and black markings on the face and abdomen. They are more orange, more slender, and have longer antennae than Asian giant hornets. Though “killer” is in the name, this wasp feeds on other insects, like the cicada, and is typically non-aggressive towards humans. Predatory insects, like the cicada killer, help maintain a balanced ecosystem.

The digger wasps can also be large, with the largest in Washington about 1.25 inches long. A solitary wasp that feeds on insects, they are generally non-aggressive and it is very uncommon for them to sting humans. Sphex ichneumoneus can be most easily recognized by the long constriction at the base of the abdomen, forming a thin, thread-like “waist”. At rest, the long antennae are slightly curled. Instead of striped, like Asian giant hornets, the abdomen of the great golden digger wasp is bi-colored, with orange on the first part and black towards the end. Other Sphex species are often completely black. These wasps are another example of predatory insects that play an important role in our natural and agricultural ecosystems as pest control.

The above images are of insects alive and in nature. A similar comparison of preserved specimens can be found on the USDA APHIS Asian giant hornet webpage.

Getting to know the insects around you can be fascinating. If you’d like to learn more about local insects, some great resources include the Washington State Master Gardener program, iNaturalist, and Bugguide.com. And of course, if you do suspect you have seen an Asian giant hornet, get a photo if you can safely do so, collect the specimen if it is dead, and report it at agr.wa.gov/hornets. 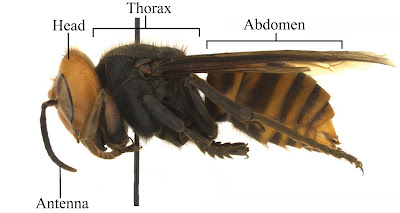