It seems to me as if WSDA’s veterinarians and emergency response team members are like fire fighters – both groups train for the worst but hope for the best. The reality is, fires do happen and so do outbreaks of deadly avian influenza.

In October, 60 people from Washington’s commercial poultry farms, state and federal agencies and WSDA participated in a training event at the Thurston County Fairgrounds.

They learned about protective gear to wear when responding to an avian influenza event and the proper use of respirators and other safety measures. They also witnessed the operation of a foaming machine used as one of several tools to depopulate flocks during disease emergencies.

“The trust we have developed with our producers over the years is a critical asset if we need to respond to disease outbreaks,” said Lyndon Badcoe, WSDA avian health veterinarian and epidemiologist. “Our training and the support from the poultry industry is much appreciated.”

Highly pathogenic avian influenza is fatal in poultry and spreads quickly. The first outbreak of the disease in our state started in December 2014 and carried over to 2015. Avian influenza remains an on-going risk for poultry here.

In a blog post, the U.S. Department of Agriculture reported that the 2014/2015 avian influenza outbreak involving several states was the largest animal health emergency in America’s history. The virus contributed to the death of 48 million birds.

Whether you own a large flock or just a few backyard chickens, there are several practices to keep in mind to protect your chickens from bird flu:
Poultry institute program at WSU Puyallup

Regulatory officials and veterinarians are also sharing information to help prevent an outbreak of avian flu or minimize its spread if it were to occur. Poultry experts from Washington State University, WSDA, University of California, Davis and industry representatives met Nov. 10 in Puyallup to discuss disease control. And earlier this year, the National Poultry Improvement Program Biannual Conference was held in Bellevue, also covering issues around preventing an outbreak of avian influenza.

Bird owners can visit our Avian Health Program webpage tips on biosecurity to learn more about poultry care and management, as well as disease prevention.
Posted by Washington State Department of Agriculture at 11:24 AM

WSDA’s new Strategic Plan guides our navigation of the future 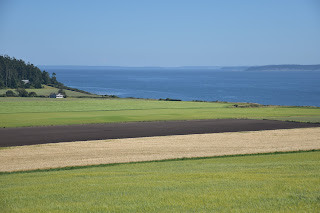 To keep moving forward, you need to know where you’re going and how you’ll get there, whether with a map or using GPS navigation tools. The “roadmap” analogy is often used for strategic planning – setting a path to the future. WSDA has that now.

We’re pleased to officially announce our agency’s Strategic Plan 2016-2021. You can find our plan posted on our website.

The previous agency strategic plan was dated 2009-2011. For various reasons, WSDA had not done focused planning since then. The current leadership team made planning a priority and made it an agency-wide initiative. The process offered valuable opportunities for conversation between our employees, among teams and programs and across the organization.

Having an official strategic plan also creates discipline to better plan budget requests and be accountable to the public and our stakeholders. That’s why it’s included as a foundation for our 2015-2017 budget request submitted to the Governor through the Office of Financial Management.

This Strategic Plan sets the department’s direction and path for the next few years. We will periodically re-visit and update our plan as circumstances and the environment change.

I hope you will read it to better understand who we are, what we do and how we’re working to support the future of Washington agriculture and the agricultural community.

Posted by Washington State Department of Agriculture at 9:06 AM

The Washington Hop Commission, the Hop Growers of America and the American Hop Museum are all in Yakima or nearby towns. (However, the Washington Beer Commission is in Kirkland.)

Grown on vines and with dozens of commercial varieties, hops are the key ingredient affecting the aroma, flavor and the bitter elements of beer. Forty growers in Yakima and Benton counties produce 75 percent of the hops grown in the U.S. The crop ranks as Washington’s 10th largest ag commodity, valued at $280 million, up 34 percent from 2014.

With the growing popularity of craft brews, American pale ales and IPAs, WSDA is busier than ever supporting Washington’s hop industry.

The agency’s hops team—consisting of several permanent lab staff and up to 35 seasonal workers—sample, inspect, grade and certify hops with the growers paying a fee for the service. Even some growers from Oregon and Idaho truck part of their harvest to WSDA’s lab for inspection.

Late August to mid-October is a hectic time for the lab team, according to Chris Wiseman, senior chemist and supervisor at the Chemical and Hop Lab. She has worked at the lab for 24 years.

“During harvest, we work seven days a week,” Chris noted. “We realize how important our work is for providing unbiased, neutral hop inspections.”

After putting the hops through a screen to remove fine debris, inspectors pick through to remove leaves and stems and look for unwanted seeds. Some customers also pay for the lab to determine the hops’ brewing value, the concentration of bitter acids in the hops.

WSDA certification is necessary for growers to sell their hops. Growers get their inspection results quickly because lab staff emails them as soon as the process is completed. Use of barcodes links each lot of hops to its original grower.

On peak days, more than 100 lots are collected and sampled.

Chris said the peak was 140 lots in a single day, stretching staff capabilities to the max. Core samples from 350,000 bales this season have been analyzed for leaf, stem and seed content, surpassing last year’s 308,000 bales. Some 2,800 commodity inspection certificates were issued.

The Yakima Herald-Republic recently captured in words and photos the enormous effort it takes WSDA staff to support growers, dealers and brewers. So the next time you see a micro-beer in the store or on tap, or enjoy a cold brew, remember that it’s likely the hops in that product were grown in Washington and inspected by WSDA.

Posted by Washington State Department of Agriculture at 9:13 AM