The benefits of the Washington State Department of Agriculture’s Asian giant hornet program just keep coming. Not only did they find and eradicate the first Asian giant hornet nest this fall, but now entomologists have found a very promising sign in the hornet traps: the first-known detection of Leptopilina japonica in the United States.

Leptopilina japonica is a tiny parasitic wasp that kills spotted wing drosophila (SWD,) which has been causing extensive damage to fruit crops in Washington for both farmers and gardeners. The wasp larvae consume the inside of the SWD larvae, eventually killing the fly. This exciting find, made in collaboration with the Systematic Entomology Laboratory (ARS-USDA) in Washington, DC, may lead to the development of biological control programs to potentially help manage SWD.

The wasp was found in WSDA’s Asian giant hornet traps. Traps sometimes catch bugs that are not the target pest. In this case, the orange juice and cooking rice wine bait was evidently very attractive to SWD, capturing countless numbers of the detested pests in addition to the wasp that entomologists discovered.


Finding better ways to manage spotted wind drosophila has been a challenge for farmers and researchers alike. First found in California in 2008, it was discovered in Washington in 2009. Unlike most fruit flies that lay their eggs in overripe or damaged fruit, SWD will lay eggs very early in the ripening process and in undamaged fruit. This means that ripe fruit could have SWD larvae in it. So far the only successful defense against SWD has been to apply pesticides when they are detected; a biological control would be a welcome management tool.

While a first for the U.S., the wasp was also recently discovered in British Columbia in the fall of 2019. Further research indicated that it may have been in Canada as early as 2016.

WSDA’s entomology lab still has thousands of Asian giant hornet trap contents to examine, but once their work and analysis is complete, the data on what was found in the traps will be made publicly available.

The COVID-19 pandemic has not only taken a toll in lives, but has also led to significant economic hardship for many in our state, including those working in agriculture. Now, WSDA has joined with the University of Washington and Washington State University in an effort to survey Washington’s farms and ranches to learn how they have been weathering this deadly pandemic. 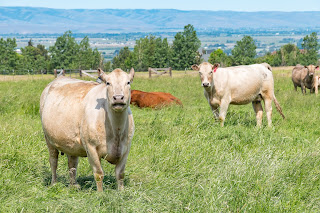 The hope is to learn more about the economic resiliency of our state’s farm operations and how they adapt, or recover, from an unforeseen event like the COVID-19 pandemic. Some farm businesses have seen little disruption to their operations, but others have suffered greatly during these past several months.

The Washington Farm COVID-19 End-of-Season Survey is open until Dec. 31 and is available in both English and Spanish. Any farm or ranch is invited to take part in the survey and all participants will remain anonymous.

There are about 80 questions in the survey, covering the type of agriculture operation as well as questions about finances before the pandemic and during this past year, including questions about how the two years compare to one another.

The survey questions are an effort to understand:

The information WSDA, UW and WSU learn through the survey will help provide information for academic research and to government decision makers as they strive to develop policies to help businesses, including those in agriculture, recover from this crisis.

The survey results will also be available to the public, though participants will remain anonymous. Visit the UW’s Center for Public Health Nutrition at nutr.uw.edu/cphn/wafarm to learn more about the survey project.

Posted by Washington State Department of Agriculture at 10:46 AM