If you are thinking of getting into the cottage food business, but are worried about selling direct to customers, it might help to know that a temporary suspension of that policy remains in effect. 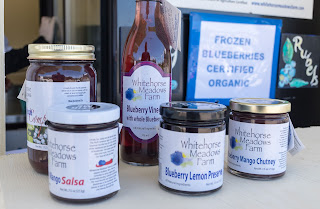 In late 2020, WSDA adopted the new policy, "Delivery of Cottage Foods products during the State of Emergency," to reduce the risk of spreading the coronavirus while still allowing market access for cottage food businesses.

Mailing cottage food products still has some requirements. The product must be packaged to prevent contamination while it’s in transit, and the cottage food operation must continue to meet record-keeping requirements required by state regulations.

WSDA continues to accept new Cottage Food permit applications. The permitting process requires an inspector to visit the location where the food will be prepared, but those inspections are currently being done remotely when possible.

Posted by Washington State Department of Agriculture at 8:36 AM

While millions of people only became aware of the Washington State Department of Agriculture’s work last year thanks to the “murder hornets,” the Asian giant hornet program is just the newest in a long history of work that the WSDA Pest Program has engaged in to protect the state from harmful invasive pests. For decades, the Pest Program, with cooperation and participation from the public, has protected the quality of life for all Washingtonians by ensuring that crops and our environment remain free from new invasive pests.

Since trapping started in 1974, gypsy moth has been WSDA’s longest-running and most successful pest program. Despite new introductions of European gypsy moths each year from where it is established in the Eastern U.S. and occasional introductions of Asian gypsy moths through the ports, there are still no established populations of gypsy moth in Washington. The success of the program is owed not only to the dedication of state entomologists over several decades, but also because of excellent tools that have been developed to detect and control gypsy moths when they try to establish in an area.

In 2020, over 20,000 gypsy moth traps were placed throughout the state. WSDA trappers caught only nine gypsy moths, but unluckily the last moth caught was found to be an Asian gypsy moth. Asian gypsy moths are worse than their European cousins because they eat a wider range of host materials (including evergreen trees) and the females can fly, allowing them to spread more easily.

Owing to their destructive nature and potential to spread easily, the federal standard recommendation is to treat for even one Asian gypsy moth. Therefore, WSDA has proposed to treat the area near Silver Lake in Cowlitz County where the Asian gypsy moth was detected.

How you can help: You can help by not disturbing gypsy moth traps that WSDA hangs throughout the state each summer and by allowing our traps on your property when necessary. This ensures a proper detection grid so no gypsy moths slip in undetected. If eradication is proposed in your area, learn all about it at agr.wa.gov/gypsymoth and help educate your neighbors.

Japanese beetles are invasive pests that are already established in many eastern states. The adults eat many types of plants but have a particular fondness for roses. The larvae (aka grubs) like to overwinter in lawns.

WSDA issued a pest alert last fall after Japanese beetle was found in a surprising location – Grandview. While Japanese beetle has been trapped and detected at airports for years (where they sometimes hitch rides on planes) it was unusual to detect the pest so far from an airport. WSDA will be conducting intensive trapping in the area in 2021 and conducting outreach in the area to notify residents and encourage reporting of Japanese beetle sightings.

How you can help: Learn how to identify Japanese beetle and report it to WSDA's Pest Program at pestprogram@agr.wa.gov or to the Washington Invasive Species Council.

One of the project
s the Pest Program conducts is a forest pest survey, looking for certain pests of agricultural concern that are not yet known to be in the state. This year the program looked for several pests, including such pests as summer fruit tortrix, oak splendour beetle, and spotted lanternfly. Thankfully, none of the pests were detected this year.

How you can help: If you see an unusual plant, insect, or other animal that you think might be invasive, snap a photo and report it to the Washington Invasive Species Council.

Apple maggot is a pest that is a serious threat to Washington’s apple industry. The pest was first found in Western Washington in the 1980s and rapidly spread throughout the I-5 corridor. Luckily, much of Washington’s main apple-growing regions remain pest free.

WSDA conducts trapping in pest-free areas as well as in apple maggot quarantine areas that have commercial orchards. When our trappers detect apple maggot adults or larvae, they alert the county pest boards and the boards take action to address the issue. This collaborative approach has prevented apple maggots from ever having been detected in Washington grown commercial apples.

An unusual number of apple maggots were detected in Okanogan County in 2020, in part due to a new approach the program took to collect host fruit (including fruit from hawthorn bushes) in areas where adult apple maggot flies were trapped. The season netted a total of 471 apple maggot adult flies and 385 larvae/pupae (from collected fruit) in Okanogan County. Members of the Apple Maggot Working Group – which includes WSDA, apple industry representatives, county pest boards, and university researchers – are currently reviewing the trapping results and are considering a recommendation to quarantine all or part of the remaining pest-free area of Okanogan County.

How you can help: Leave your apples at home if you live in the quarantine area. Learn about the apple maggot quarantine, which prohibits the movement of homegrown fruit from quarantined areas (including all of Western Washington and some areas in Eastern Washington) into the pest-free areas of Washington. 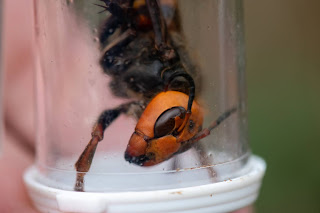 2020 was the first year that we monitored for Asian giant hornets, after confirming the first detection in the country in December 2019. We had to rapidly develop plans for trapping, tracking, and eradication in the spring in collaboration with the U.S Department of Agriculture.

Asian giant hornets garnered national attention when they were dubbed "murder hornets" by the media in May of 2020. Suddenly, the eyes of the world were on our staff and our work. But the notoriety also had a benefit - millions of people were educated about Asian giant hornets and thousands stepped up to help by either reporting suspected sightings or placing traps on their property and submitting their catches for 17 weeks or more.

Thanks to the combined efforts of WSDA and citizen scientist trapping, we were able to trap, tag, and track an Asian giant hornet back to its nest last October - finding and eradicating the first-ever Asian giant hornet nest in the United States. Of the 31 specimens that were reported or trapped, half were detected by the public. We literally could not have done it without you.

WSDA's pest program recently released a video summarizing the program's work in 2020 and is currently meeting with national and international partners to plan trapping for 2021. While the plans are still in development, we do know that citizen scientist trapping and reporting will continue to play a significant role in the work to prevent Asian giant hornets from establishing in the U.S.

How you can help: Continue to report suspected Asian giant hornet sightings in Washington state using our online reporting form or by emailing hornets@agr.wa.gov or calling 1-800-443-6684. If you live in Washington - especially Whatcom, Skagit, Island, or San Juan counties - consider participating in citizen scientist trapping starting in July. You can also join our Asian Giant Hornet Watch Facebook Group to stay up-to-date on Asian giant hornet happenings in the Pacific Northwest.

Our work continues - together

WSDA’s Pest Program monitors for over 130 pests each year, and that list only continues to grow with the addition of new invasive pests such as the Asian giant hornet. The work is always a collaborative effort between WSDA and the community. While we set and monitor traps, the public plays an important role in reporting new suspected pests, allowing traps to be placed on their property, and in some cases responding to pest detections. This collaboration between state and local organizations and private citizens has helped to keep pests in check in the state for decades, which protects not only our crops but the environment and even human health.