This past year, Washington escaped the devastating wildfires, flooding and droughts affecting other states. But 2017 was still a busy year for WSDA. Here are a few highlights from our year.

New ways of serving the ag industry
The agency’s primary purpose is to serve the agriculture industry, and sometimes that means we need to upgrade our gear. 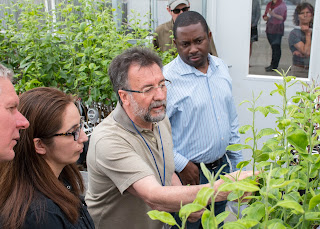 This past year, one major upgrade was the completion of a 4,800 square-foot greenhouse, replacing an older, smaller greenhouse that had been in use for years. Located at Washington State University’s Irrigated Agriculture Research and Extension Center at Prosser, the new WSDA greenhouse features improved temperature and irrigation controls and allows nurseries to offer virus-tested, disease-free stock to orchardists and fruit producers across the U.S. and for export markets.

Bug history made in August
In August, we made an astonishing discovery – an active gypsy moth nest hidden among some shrubbery in a Pierce County community. It is the first instance ever of anyone detecting live female gypsy moths actively laying eggs.
Altogether, about 100 live females and 95 males gypsy moths were caught in this one location. While that was not a record for total seasonal catches, finding an active nest made for an historic discovery for our gypsy moth program.

Travelling for agriculture
WSDA Director Derek Sandison is a great believer in getting out and meeting with those involved in agriculture. Some meetings were close to home, such as his participation in the South King County Agriculture Town Hall. There, Director Sandison joined 4-H coordinators, WSU researchers and local government leaders to discuss ways to support farming near an urban community. 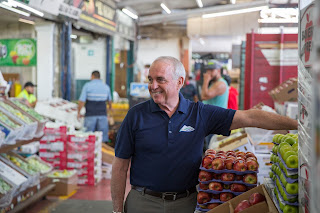 But some trips took the director out of state, such as the trade mission to Mexico led by Governor Jay Inslee. The delegates visited both Guadalajara and Mexico City, touring markets, meeting with government officials and generally demonstrating the importance of Mexico to Washington agricultural exports.

New programs
This year two new programs at the agency got under way – the Produce Safety Program and the Industrial Hemp Pilot program.
The Produce Safety Program was created in partnership with the Food and Drug Administration, which provided a 5-year grant to fund the program. Its primary mission is to help producers in our state comply with the new requirements of the Food Safety Modernization Act.

Also gearing up in 2017 was the new Industrial Hemp Pilot, created after the legislature allocated $145,000 for WSDA to launch the new program. The first hemp growing licenses were issued this past spring. However, funding for the program only covered the first year and the seven licenses issued do not cover operational costs. The program faces an uncertain future for 2018.

Consumer protection
WSDA’s Weights and Measures inspectors did more than the usual, but critical, monitoring of gas pumps and scales for accuracy. The team also collaborated with financial institutions to combat fraud by inspecting fuel dispensers for credit card skimmers, which can steal credit and debit card information from unsuspecting consumers.

Also this year, the inspectors began placing fuel rate stickers on gas pumps during their routine inspections, following a legislative mandate to inform consumers of taxes on fuel. The current total taxes drivers pay when filling up includes 67.8 cents per gallon for state and federal taxes on gasoline and 73.8 cents for gallon for diesel. 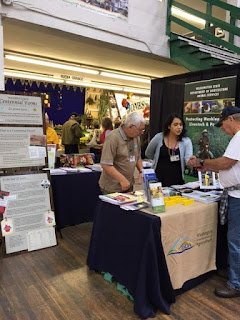 WSDA typically staffs a public outreach booth at one county fair most summers, but this past year, the agency set up booths at three fairs across the state, including the Washington State Fair in Pierce County, the Central Washington Fair in Yakima County, and the Evergreen State Fair in Snohomish County.
Director Sandison visited all three locations, as did state veterinarian Dr. Brian Joseph and numerous agency employees. Director Sandison also attended the Grant County Fair, where he was interviewed for the television show Washington Grown.

Looking ahead to 2018
Much anticipated by both staff and stakeholders, WSDA is just starting the process of updating its website, which hasn’t been revised in at least a decade.

In Eastern Washington, keep an eye out for newly designed apple maggot signs, which WSDOT will install this spring.

WSDA will be monitoring the all-important 2018 Farm Bill, working with members of Washington’s congressional delegation and our partners at the National Association of State Departments of Agriculture.

Stay connected with WSDA
These highlights barely scratch the surface of the work that the agency has done in 2017. To stay up with the latest news, follow us in 2018 through this blog, on Facebook or Twitter, and now on Instagram.

Posted by Washington State Department of Agriculture at 11:07 AM

Interest has been high in a case of EHV-1, neuropathogenic strain, detected earlier this month in King County. This particular strain of equine herpes virus is highly contagious and, while it won’t infect people, it can be fatal to horses.

Since being notified of the infected horse on Dec. 13, WSDA has had a quarantine in place at the stable where it was housed. So far, 32 horses housed at the stable have been tested. The virus has been detected in 9 of these horses. Seven horses have been euthanized, while several others are being monitored.

The virus spreads between horses only at certain stages of the disease, so not all horses have currently been tested. Even though we may not detect the virus when testing, the horse may still be infected. At the same time, even if we detect the presence of the virus in the horse or if the horse develops neurological symptoms, it does not mean the horse will be euthanized. Most horses recover.

Given the highly infectious nature of the virus, we continue to urge horse owners to watch for signs of possible infection, such as: 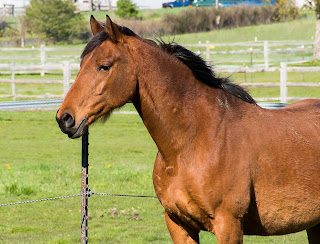 We recommend that horse owners:


In addition to working with the horses, WSDA and local veterinarians have been working closely with the local community to ensure excellent biosecurity is practiced whenever someone must leave the stable. For more tips on keeping your own horses safe through good biosecurity practices, please see our previous blog post on this incident.

The time between exposure and illness from EHV-1 varies from two to 14 days. By self-quarantining animals with possible symptoms, practicing good biosecurity and contacting your veterinarian as soon as you suspect possible symptoms, you can help prevent the spread of this virus.
Posted by Washington State Department of Agriculture at 9:14 AM

Last week, WSDA was notified of a laboratory-verified case of equine herpes virus myeloencephalopathy or EHV-1, neuropathogenic strain, in King County.  EHV-1, in its neurotropic form, is a highly contagious virus that can be fatal to horses but will not infect people.

WSDA immediately put a quarantine in place and has been testing horses that were housed near the first infected horse and horses showing clinical signs of infection. Work has also begun to trace animals that may have come into contact with the first infected horse. So far, five additional horses at the stable have been found to be infected and are being closely monitored.

Given the highly infectious nature of the virus, WSDA is urging horse owners to follow these recommendations:

Suspected cases should be checked for EHV-1 by a veterinarian. The Washington Animal Disease Diagnostic Laboratory in Pullman provides EHV-1 testing, including differentiating the EHV-1 neuropathogenic strain. Veterinarians can contact WADDL at (509) 335-9696 to submit a red top (serum) blood tube, and a lavender top (whole blood) tube and nasal swabs.

Although there are several EHV-1 vaccines available that control respiratory disease or abortion in horses, none of the vaccines provide immunity against EHV-1, neurotropic form.

Keep it clean and protect your horse

The disease is spread from horse to horse through direct contact, on feed, tack and equipment. While people cannot be infected by the virus, they can carry it on their clothes or hands. Here are some biosecurity steps horse owners should follow to protect their animals from becoming infected or spreading this virus:
The time between exposure and illness from EHV-1 varies from two to 14 days. By self-quarantining animals with possible symptoms, practicing good biosecurity on your property and during travel, and contacting your veterinarian as soon as you suspect possible symptoms, horse owners can do a lot to prevent further spread of the virus.

Posted by Washington State Department of Agriculture at 2:10 PM

Listening to the agriculture community

The Dec. 8 meeting was organized by WSDA and Washington State University leadership as an opportunity to engage with leaders in the state’s ag community. The agenda included time for Director Derek Sandison and Washington State University President Kirk Schulz to discuss WSU’s College of Agricultural, Human and Natural Resource Sciences (CAHNRS) and a search for its next dean.

The agenda also provided time for those gathered to share their priorities regarding ag communications, discuss support for a 2018 farm bill and other issues of concern to them.

“The best thing we can do is listen if we’re going to do our part to support Washington’s vibrant agriculture community,” Director Sandison said.

Joining President Schulz at the meeting were members of his leadership team, including Colleen Kerr, vice president for external affairs and government relations, Ron Mittelhammer, current CAHNRS dean, and Phil Weiler, vice president for marketing and
communications. The meeting began with an update on the search for a new dean for CAHNRS. The process began in late 2016, but is down to four finalists currently being considered for the position. President Schulz also shared his vision for CAHNRS and its role supporting Washington agriculture.

For one thing, he said, he wants to ensure the research that is done produces results that help agriculture succeed in the marketplace. Additionally, he would like to see the school get a broad range of students interested in agriculture, including those studying engineering, accounting, and communications. Finally, he is hoping the new dean will be externally focused, out and about talking to people.

The ag representatives also shared their priorities, including more research on soil health and strategies for retaining good instructors at CAHNRS.

7 Tips for Getting the Best Christmas Tree


Whether it’s a long-held tradition or your first tree hunt, the trip to find the perfect tree can be an exciting experience.

She shared her top tips for selecting the best tree if you’re purchasing one and how to prepare for a visit to an actual tree farm or lot.

7 Tips for Getting the Best Tree

Want more tips about keeping your tree green, what to do with it after Christmas or how to pick out a great tree from a tree lot? Check out the full Facebook live interview with Shelley below. 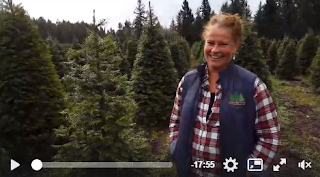 Posted by Washington State Department of Agriculture at 2:45 PM