During the busy Washington rodeo season over the last few months, staff from the WSDA Animal Services Division attended several of these events. Officials set up inspection points to assure that both participants and stock contractors were complying with animal health and movement laws.

This was the third year WSDA officials were invited to attend the Idaho event and work alongside Idaho authorities to make sure animals in transit between the two states complied with animal health and livestock identification rules and regulations. Unfortunately this year’s event in Idaho was hindered by poor weather conditions, canceling many of the planned activities.

Later that week in September, roles reversed and Idaho authorities were invited to participate in a compliance effort at the Spokane Rodeo. The Spokane rodeo attracted many contestants from across the western states and was an extremely valuable experience for all involved personnel.

Throughout the four events, WSDA officials contacted 121 participants, resulting in opportunities to educate about 39 identified violations -- mostly associated with invalid health or proper ownership paperwork. Those found in violation were issued warnings and required to come into compliance before leaving the event.

Compliance efforts were sensitive to event operations and timelines and were conducted on the grounds with the permission and support of the organizers. This was yet another example of interstate cooperation to protect the health and wellbeing of our state’s livestock industry.
Posted by Washington State Department of Agriculture at 2:01 PM

Several employees from WSDA’s Food Safety and Consumer Services Division will be joining the conference as part of the agency’s on-going efforts at promoting food safety. Among the WSDA officials attending will be Claudia Coles, the division’s policy and external affairs manager. Claudia is a well-established training specialist and will share her insights on the federal Food Safety Modernization Act (FSMA). Claudia will also discuss ways to support effective food safety and sanitation processes to minimize the risk of foodborne illnesses.

Miriam Burbach of the Food and Drug Administration’s Seattle District Office, will discuss implementation of the new FSMA rules.

The conference typically draws people in the food processing and food safety industries, such as food and animal feed processors, service providers to the food industries, food retailers, sanitation suppliers, consultants and regulators.

The FDA, Northwest university extensions, WSDA, Oregon Department of Agriculture and the Northwest Food Processors Association work together to put on this annual event.

Agenda items for the conference include:


WSDA will host an informational booth where attendees will be able to find information on multiple food safety topics. If you can’t make it to the conference, but are still seeking food safety information, or updates on courses and workshops, visit the Washington State Food Protection Task Force website.

Posted by Washington State Department of Agriculture at 12:58 PM

If you’re in the business of controlling pests by applying pesticides, you may be interested in some new rules that WSDA is proposing.  A new limited specialty classification will be created for pest control operations that are so specialized only a small number of individuals across the state would fall into the category.

Currently, WSDA must go through the rulemaking process to create any new license classification, which takes significant time and resources. To speed and streamline the process of establishing specialized licensing classifications, we propose to create the “limited specialty” classification that can accommodate unique types of pest control that require certification. This rule change will help WSDA to certify applicators more quickly, while providing prospective licensees with exams that are more focused on their particular area of specialization.

Some of the existing classifications that would fall under limited specialty include:

Hearings on this proposal are scheduled for Nov. 9 in Yakima and Nov. 10 in Olympia.
You can visit our Pesticide License Classifications rulemaking web page to learn more about the proposed changes, which fall under WAC chapter 16-228.
Posted by Washington State Department of Agriculture at 8:09 AM

October is National Farm to School Month, and at many Washington state schools, it began with Taste Washington Day.

This year, the event fell on Oct. 5th, as students and farmers came together to celebrate Washington agriculture. There were 45 school districts participating in this year’s Taste Washington Day, the sixth year of the event. That means at least 280,000 students ate seasonal, Washington-grown lunches and learned more about local food and farms.

Over 50 farmers signed up to be a part of the event, providing everything from apples to beef to cabbage, from watermelon radishes to zucchini. Beyond growing all kinds of tasty ingredients for the menu, farmers were guest speakers, set up displays in the cafeteria, did taste tests of their foods, and even gave interviews.

The event, officially proclaimed Taste Washington Day by Gov. Inslee, was organized by WSDA and the Washington School Nutrition Association with support from the Office of Superintendent of Public Instruction and many regional Farm to School partner organizations.

The annual event brings schools and farms together so students can learn where our food comes from and how Washington farmers put food on our plates.

It’s also a chance for many farms to strengthen or form new partnerships selling food directly to schools.

First lady Trudi Inslee visited the Eatonville School District, where Washington-grown produce was on the menu and Mrs. Inslee could lunch with the kids. As part of the visit, Mrs. Inslee learned about Columbia Crest A-STEM academy’s green school initiatives and visited the new Kjalsted Valley Ohop Farm, where students will soon be able to learn on the farm each year thanks to the recent gifting of the farm to the Eatonville School District.

Nutrition staff at all of the participating schools served menus featuring foods from local farms.
At some school districts, Taste Washington Day was celebrated in other ways. Students at Lake Stevens School District brought applesauce from their own apple trees at home to share with classmates. Moses Lake School District invited dairy farmers to speak to students in the cafeteria about farming and healthy dairy foods like milk. The local news covered the activities at Ridgefield School District where Quackenbush Farms and Northwest Organic Produce visited schools to talk with students.


Many schools like those in the Grandview and Evergreen school districts had big “Washington Apple Crunch” celebrations on Oct. 5. Students across the state “crunched” into their locally grown Washington apples all together at noon. WSDA and other organizations even joined in the fun, to make an apple crunch heard ‘round the country.’

A big thanks to all the school districts, farmers, and students who help make Taste Washington Day a success every year.
Posted by Washington State Department of Agriculture at 5:04 PM

Not all egg hunts happen in the spring. In the Washington State Department of Agriculture Pest Program employees hit the road for a unique egg hunt with a higher cause – protecting Washington’s environment from the invasive gypsy moth.

In the shadow of Mount Rainier on a crisp and sunny fall day, about a dozen yellow WSDA vests could be seen wandering around a neighborhood near Graham. Such “egg hunts” occur in areas of interest to the pest program after summer gypsy moth trapping results.

The eggs they were looking for, however, are a lot harder to see than brightly colored eggs in the grass. Gypsy moth egg masses are cream, white, or orange colored. They are usually oblong and fuzzy. The egg masses can be laid on any outdoor surface, but the moths tend to prefer the base of trees.

Having seen so many egg masses on my trip back east this summer, I volunteer to help out. Here are some things I learned on the hunt: 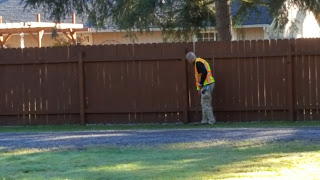 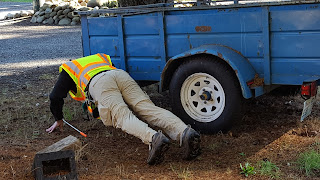 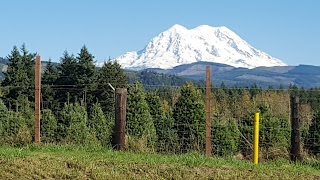 In the end we didn’t find any egg masses that day, but the hunt continues. WSDA staff will be searching again this month, weather permitting. Once the egg mass survey is complete, the program will decide if treatments will be recommended for any areas in 2017. Stay tuned for that announcement, expected later this year.

Posted by Washington State Department of Agriculture at 12:53 PM


If you’ve ever wondered where your food comes from, who is growing it, and how it gets to your table, Washington Grown is the show for you!

Season four of Washington’s one of a kind, Emmy-winning farm to table television show began airing last weekend with new planned each week through the end of the year.
Washington Grown’s goal is to connect consumers with those who grow and process their food. Each episode features farmers, local restaurants with outstanding recipes, and nutritional information about Washington’s crops. There are also frequently bonus features such as an inside look at food processing facilities.

Here are the themes for October’s episodes:


Posted by Washington State Department of Agriculture at 8:00 AM