For WSDA entomologists, August has been an exciting month.

On July 31, record numbers of gypsy moths started showing up in traps in the Graham/Puyallup area. From two traps with two moths each to a trap with 6 moths, then 8, then 14. In all, 37 male gypsy moths were caught in that area on a single day.

By comparison, we found 25 moths total during three months of trapping last year across the whole state.

But for the entomologists and trappers in our Pest Program, the high point was still to come. 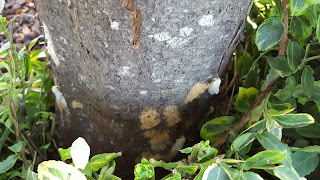 Given the unusually high number of catches, our gypsy moth team went to inspect the area Aug. 1 to find the source of the moths. Ground zero turned out to be a tree and some bushes in a residential neighborhood, where, for the first time in the program’s 40-year existence, entomologists found live female gypsy moths, actively laying eggs.

The first two team members to arrive had only an empty food carton from Taco Bell, but they quickly put it to use collecting live females. Because European gypsy moth females don’t fly, they were relatively easy to pick up and contain. Male moths tried to fly off, but they were caught mid-air and didn’t get far.

On follow up visits, about 30 additional females were found, until the bushes were removed on Aug. 4. In total, approximately 100 female gypsy moths were collected.

But the work wasn’t done. All the moths, pupae and other materials collected had to be brought back to WSDA’s labs to be frozen and sorted, with entomologists sifting through the materials to tally the number of moths. Potentially useful specimens will be used for displays taken to public education and outreach events. The rest will be destroyed to ensure no gypsy moths survive or escape.

While finding live females in infested areas like New England is relatively easy because of their high numbers, that is not the case in Washington where the pest is not established. Because the females don’t fly, finding the one tree or bush where a new infestation is starting is extremely difficult. There are very few clues to point you to where a female gypsy moth may be hiding. So how did WSDA find the infestation this year?

High numbers of male gypsy moth catches alerted WSDA to the problem. The team was able to focus their search in the area of the highest catches. The team also looked for vegetation that showed damage from caterpillar feeding earlier this spring. But adding to the challenge, females aren’t always located on vegetation. They can lay their eggs anywhere – such as outdoor patio furniture, the underside of a brick on a house or inside an old tire, for example – so other surfaces had to be examined as well.

In the end, it was skill and luck that resulted in the discovery of the live moths.

A trapper hung a trap on the tree that morning. By noon, three male moths were already trapped in it. Inspection of the tree showed it had extensive caterpillar feeding on the leaves. When the team member pulled back the bushes at the base of the tree, the infestation was discovered on the concealed base of the tree and within the bushes themselves.

It was a truly exceptional find.

One of the takeaways from this experience is confirmation that WSDA’s gypsy moth program is working.

Last year, two male moths were caught less than a mile from the Graham/Puyallup site where the females were found this month. Because of that catch, a high-density grid of 64 traps per square mile was established in the area. The grid enabled the team to target their search more effectively, which led to finding the actively reproducing population.

Trapping continues this year through September, by which time moths will no longer be flying. Because of the work that our gypsy moth program has been doing for decades, WSDA has prevented gypsy moths from becoming established in Washington for more than 40 years.

This discovery is another example of the great work the pest program does to protect our neighborhoods, farms and environment from potentially devastating invasive pests.

Posted by Washington State Department of Agriculture at 10:26 AM

From Sept. 18-22, representatives gathered in Spokane, the Tri-Cities, and Seattle will provide one-on-one meeting opportunities.

Navigating foreign markets can be a challenge, but expertise from knowledgeable representatives can help companies that are interested in expanding into foreign trade.

The representatives at these consultations can help a business operator understand distribution chains and import requirements, identify product opportunities and buyers, and develop export or marketing plans.

Although there is no charge to attend a consultation, space is limited. Anyone interested in joining a meeting should complete an application. Additional details are provided on the International Marketing Program's event flyer. You can also contact WSDA trade specialist Julie Johnson at jjohnson@agr.wa.gov or 360-902-1940.


Posted by Washington State Department of Agriculture at 12:56 PM

Among its many trade support services, WSDA’s International Marketing Program facilitates trips for international buyers and Washington state producers. These trips, referred to as trade missions, put representatives from both sides of the trade relationship together so one can learn more about the crops and markets of the other.

The delegates, representing import, retail, distribution and wholesale industries, expressed interest in looking for fruit suppliers, which made the Washington state portion of their trip an ideal opportunity.

In Yakima, the Washington State Fruit Commission delivered a briefing before the buyers participated in one-on-one meetings with 15 different Washington-based companies. Connecting buyers to suppliers is one of the primary functions of the international marketing program.

"These meetings created an opportunity for buyers to meet with known suppliers or build relationships with new ones," trade specialist Julie Johnson said.

In Wenatchee, the Washington Apple Commission also provided a market briefing to buyers, setting the tone for the day's tours of fruit packaging facilities and an orchard.

A day of Washington fruit

At Stemilt Growers, the large group of delegates was split into smaller tour groups organized by language. Two new international marketing team members, Zachary Garza and Elisa Daun, were a valuable addition to the trip. Both trade experts, they have additional multilingual skills; Zachary is a fluent Spanish speaker, and Elisa is fluent in Mandarin.

The tour guide gathered attendees around him and discussed current and future apple trends, with an emphasis on Cosmic Crisp. Group members asked about the new variety’s color and size, and whether and when they’d be packaged and sold.

The guide described Cosmic Crisp’s bright color and lustre, adding that it was an ideal size for packing and shipping.

The group then made its way to Domex Superfresh Growers, where general manager Ron Gonsalves led the group into a hallway where the packaging process could be seen. “See all this? This is new,” he said, gesturing toward the room of machines and workers. Half of the facility was lost in a fire two years ago.

But that day, in the middle of an industry-wide cherry processing peak, an unknowing observer couldn’t have guessed at the facility’s loss. Stainless steel machines hummed and workers combed through piles of cherries, separating leaves from fruit.

Domex Superfresh Growers is one of the largest cherry lines in the state. At the peak of cherry season, it packs up to 2,000 bins per day, and workers pack in shifts 7 days per week to keep up.

At the next stop, McDougall and Sons’ Legacy Orchard presented visitors with rows of ambrosia apple trees. Scott McDougall talked with the group about varieties and orchard operations. Learning about the goals and challenges fruit growers have gave visitors more context for how fresh fruit gets from the tree in Washington to their shelves and tables abroad.

Washington was not the buyers' only destination; before turning in for the evening, the group would trek to Seattle before an early flight to California.

“We hope that by the time they return home,” said Julie, “they have more knowledge about Washington agriculture and are eager for trade opportunities in the future.”
Posted by Washington State Department of Agriculture at 1:13 PM

Showing pigs at fairs is a time-honored farming tradition, but it puts pigs in close contact with each other and people. They’re also in a new environment with unfamiliar animals and around potentially disease spreading equipment, like brushes and boots. These factors can increase the risk of disease for the pigs.

Some diseases can transmit between humans and pigs, not just from animal to animal. One example is Influenza A, or “Swine Flu,” which has been a problem at fairs in recent years.

Another illness, Seneca Valley Virus (SVV) has recently been on the rise. Also called Senecavirus A, it’s an unfamiliar disease that presents symptoms similar to foot-and-mouth-disease (FMD). The only way to tell the difference is through veterinary diagnostic tests, so alert your veterinarian if you find blisters around the snout, mouth or hooves, or notice general symptoms of illness like fever, lethargy and loss of appetite.

Before the exhibition or show

To keep your pigs healthy and limit the spread of disease, make sure you are meeting exhibition health requirements. In addition, it is a good idea take some swine health precautions.

At the exhibition or show

At a fair, exhibition, or sale, be sure to assess your pigs’ health on a daily basis. Here are some other recommendations:
After the exhibition/show

When pigs are brought home after the fair, disease risk can be high. Pigs from different farms are brought together and comingled with each other. Just like people can spread illness by comingling with others in a public space, pigs from varying locations and health statuses can spread illness to each other. It’s a good idea to isolate returning pigs.
Healthy, happy pigs are an important part of the showing experience, and create a valuable learning experience for those unfamiliar with agriculture and animal husbandry. Keep your pig’s area clean, watch for disease symptoms, and know who to contact if you suspect a health issue.

To learn more about Seneca Valley Virus, please refer to this fact sheet.

Posted by Washington State Department of Agriculture at 11:01 AM