Mosquito season is upon us which means it’s time to make sure your horses are vaccinated for West Nile virus. Washington often reports more cases of West Nile virus in horses than most other states in the nation, making vaccinations all the more important.

Usually, most confirmed cases of West Nile virus are in the central and eastern part of our state. Cases crop up beginning in late spring and through the summer and fall, which is also prime mosquito season. 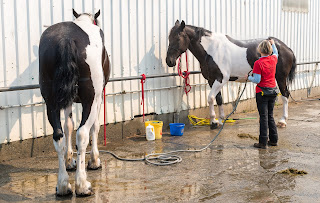 Since the virus spreads by mosquitoes, there are no mass outbreaks affecting several horses at once, but rather just one or two cases at a time. Last year, nine horses were diagnosed with West Nile virus statewide, but just two years earlier, 36 cases were reported in Washington, with several horses dying or being euthanized as a result of the disease.

West Nile virus is spread by mosquitoes that have fed on infected birds and while it can sicken people, horses, birds and other animals, it does not directly spread from horses to people or other animals.

Most horses exposed to the West Nile virus don’t show any symptoms. When they do become ill, however, symptoms can include lack of coordination, loss of appetite, confusion, fever, stiffness, and muscle weakness, particularly in their hindquarters. The disease is fatal in about a third of the cases where these symptoms show up.

The vaccine is most effective when given to horses early in the mosquito season. Horses require two doses of the vaccine initially, and then boosters at least annually.

Use insect repellent and fly sheets to reduce exposure to mosquitoes. Also,look for and eliminate areas with standing water where mosquitoes can breed. Get rid of old tires or other areas where rain water can accumulate. It’s even a good idea to refresh the water in water troughs weekly.

Posted by Washington State Department of Agriculture at 1:34 PM