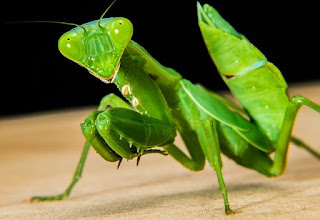 A popular and gruesome video on the internet shows a large praying mantis attacking and quickly consuming an Asian giant hornet. This video, plus the predatory reputation of mantises in general, has many people wondering why we can’t just use this natural control to deal with Asian giant hornets.

There are a few reasons why this is not likely to be a useful strategy. First, the hornet in the video was anesthetized before filming. While it is certainly possible that a mantis could kill an Asian giant hornet in the field, it is also likely that the hornet would kill the mantis. In fact, praying mantises are a well-documented food source for Asian giant hornets in their native range.

Even if mantises were more effective predators of Asian giant hornets, it is very difficult to maintain high enough populations of general predators to control pest insects. Consider that each hornet nest might have a few hundred active workers at maximum colony size, and that there may be multiple colonies active in the same area at the same time. A praying mantis can only eat so many insects, and they would have to be in the right place at the right time to catch one. There is no evidence that they would preferentially seek hornets or hornet nests.

Other aspects of their biology that make them unlikely to control Asian giant hornet if it becomes established include a slow reproductive rate for the mantises and the fact that they will eat any insect they happen upon - in fact, they seem to prefer grasshoppers and related insects. If that rare hornet-praying mantis encounter even happens, they might already be satiated from eating other insects - including honey bees. The presence of praying mantises also changes honey bee behavior; honey bees will avoid foraging when they see praying mantises. Saturating the landscape with praying mantises (which would require an industrial insect-rearing facility) would likely have negative impacts on managed pollinators and many native insect species.

The two large praying mantises in Washington State are introduced species, and while they are an interesting and acceptable presence in our gardens, they aren’t effective or specialized enough to control any species of insect – including Asian giant hornets – at a large scale. Consider learning about our native mantis, which is uncommon and difficult to find.