Hungry hornet babies – what’s on their menu in the PNW?

While the scientific literature indicates what Asian giant hornets eat in their native region, scientists didn’t know what they would eat in the Pacific Northwest – until now.

This story starts at the end - examining the fecal matter, or frass, found in the cells with the Asian giant hornet larvae. To determine what the baby hornets had been eating locally, the WSDA molecular diagnostics lab ran DNA analysis on hornet frass.

The results showed some of what scientists expected – paper wasps and honey bees, for example. But some things – like cow (possibly from a discarded hamburger?) – came as a bit of a surprise. Take a look at what else the hornet larvae have been eating on the menu below. 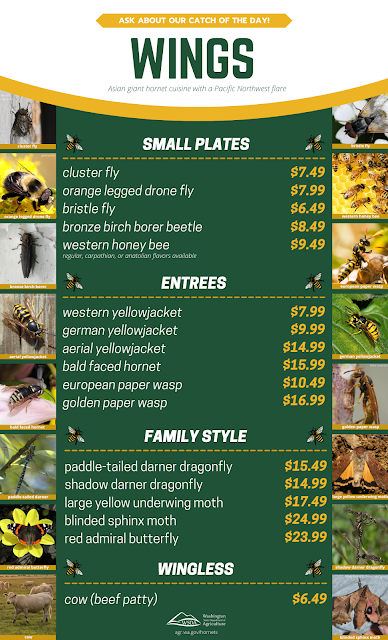 Finding out what hornets were eating in Washington provides for more than just passing curiosity and a quirky graphic. This information gives a first glimpse at what insect populations could be harmed if the Asian giant hornets establish themselves here.