At the fair, make sure show animals get “the blue, not the flu”

As wild and domestic bird flu cases continue to expand to additional counties across Washington, another influenza (flu) strain is also picking up in the U.S. Last week, the Centers for Disease Control and Prevention (CDC) confirmed the fourth case of swine flu in a human – this time in Oregon.

Influenza viruses can be passed between humans, birds, and pigs. Because of this, it is important to practice good biosecurity whenever interacting with either birds or pigs on your farm and when attending fairs and livestock shows.

No swine flu vaccine is available for animals yet in the United States, but work is being done to get an approved vaccine to use for control in the face of an outbreak, with promising vaccines demonstrating 100% efficacy in swine.

Swine flu can spread among pigs throughout the year, though rates increase significantly when infected pigs spend more than three days at a fair or livestock show. Reducing the time pigs spend at fairs to three days or less is one way to reduce the risk of spreading swine flu. The Swine Exhibitions Zoonotic Working Group has also produced a checklist for exhibition organizers and youth organization leaders to minimize the spread of influenza, which includes recommended actions to take before, during, and after exhibitions.

For exhibitors as well as visitors to pig exhibits, these recommendations help prevent the spread of flu between pigs and humans:

But don’t think it is just the pigs that can infect humans. Humans can also infect pigs, so if you are not feeling well, take precautions to prevent spreading disease to your animals or have someone else care for your animals until you feel better. 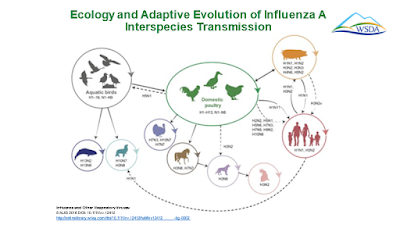 If you own both birds and pigs, they should always be kept separate to reduce the risk of infection and mutating viruses. Prior to COVID-19, the last global pandemic was swine flu in 2009 – infecting an estimated 60 million people and resulting in over 12,000 deaths in the United States alone. That strain had signs of combined human, bird, and swine origins.

Given the high numbers of detection of bird flu throughout the country this year, adding swine flu to the mix is an unwelcome prospect – increasing the risk of another infectious and potentially deadly influenza strain. Keeping pigs and birds separated and practicing good biosecurity could prevent the next pandemic.

Video: What is swine flu?

What People Who Raise Pigs Need To Know About Influenza (Flu)