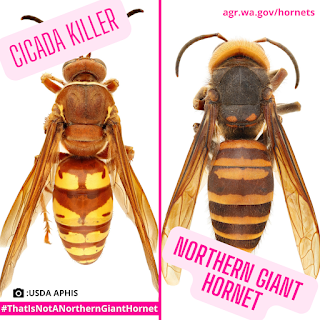 With summer here, people are outside enjoying nature and noticing insects! Citizens are on the lookout and reporting suspect giant hornets. WSDA’s team has been hard at work reviewing hundreds of reports of suspect northern giant hornets. Most of the insects reported are not harmful and play an important role in the environment. One insect, the western cicada killer (Sphecius grandis) seems to be trending as the most common native bug mistaken for a northern giant hornet (Vespa mandarina).

If you can familiarize yourself with some features of the look-alike insect in the spotlight, you’ll be able to identify differences. The western cicada killer is a very common native wasp that can be almost as large as a northern giant hornet. Cicada killers can be seen from late spring and throughout the summer. 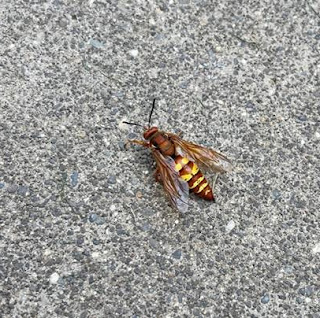 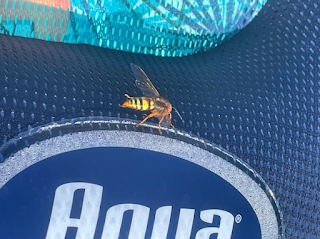 Female cicada killers are solitary and dig their nests in the ground. You will often find their nests around areas with lots of sunlight, and sometimes you will see a mound of dirt near the entrance. Cicada killers do not actively defend their nests normally. Males can be territorial, but they do not have a stinger.

Northern giant hornet nests can be underground or in tree cavities. Unlike cicada killers, hornets are social and live in large colonies – which they will vigorously defend. Away from the nest, hornets are typically non-aggressive unless provoked.

WSDA has other information on look-alike insects, including a poster guide available for use and download. Click here to learn more about identification. Cicada killers do not need to be reported, but if you suspect you’ve seen a giant hornet in Washington State or are not sure if what you have seen is one or not, get a photo and report it at agr.wa.gov/hornets.