Although it is November, things are just starting to slow down for WSDA gypsy moth survey coordinator Tiffany Pahs and WSDA’s gypsy moth trapping program. They are only now wrapping up their 44th year of trapping for gypsy moths, part of a decades-long successful effort to keep gypsy moths from establishing in Washington.

While there are no permanent populations of gypsy moths in Washington, each year several European gypsy moths enter the state by hitchhiking with people who move from or visit infested areas. More than 20 states have permanent gypsy moth populations. Asian gypsy moths occasionally slip into our state as well – usually through international ports, though ships are routinely screened for gypsy moths.

Trapping is the cornerstone of the gypsy moth program. It consists of placing thousands of traps throughout the state each summer and fall to monitor for gypsy moth introductions. Almost 30,000 traps went up this year alone, set out by 48 dedicated trappers. You may have seen one in your neighborhood – small, triangular boxes hanging in trees from about June to October.

In addition to the summer trapping, Pahs’ program also conducts visual surveys in late fall for alternate live stages of gypsy moths, such as egg masses, cocoons, or caterpillar sheddings.

Here are the top six things to know about this year’s trapping results: 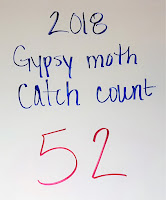 WSDA’s gypsy moth program will assess the trapping and any egg mass survey data later this year to determine which locations, if any, require eradication treatments to prevent the permanent establishment of gypsy moth populations.

European gypsy moth is one of the most destructive invasive species ever introduced in the United States. They defoliate millions of acres of trees each year, which can kill the trees. In 2016, the damage was so bad in New England that the swathes of dead trees could be seen on satellite imagery. This year, Rhode Island reported that one-quarter of the state’s hardwood trees have died, in large part due to gypsy moth caterpillar infestations.

Asian gypsy moths pose an even greater threat as they readily attack evergreen trees, which die with only one year of defoliation. Additionally, unlike their European cousins, Asian gypsy moth females can fly, which enables them to spread much more rapidly.

You can see the full trapping results on WSDA’s website and watch the video below to learn more about why gypsy moths are such a threat to Washington’s environment.

Posted by Washington State Department of Agriculture at 10:09 AM