But finding the nest was just the first step in the eradication. After the discovery of the nest site, WSDA entomologists had to safely remove hornets living in the nest, remove the tree, and finally split the tree open to reveal the nest inside.

After opening the tree containing the Asian giant hornet nest on Oct. 29, WSDA entomologists still had a lot of work to do to collect data about what the nest contained. Much like the election, the tallying took quite a bit of time and, to some extent, continues.

The nest was just over 8 feet high in the tree and, once opened, was found to be about 14 inches long and 8 to 9 inches wide. Here are the preliminary results of what our entomologists found in the nest.

Despite multiple applications of carbon dioxide, removal of the workers, and storage in a cold facility, most of the specimens were still alive when the nest was opened.

Where we go from here


WSDA will continue trapping through at least Thanksgiving and possibly beyond, but will likely only track worker hornets. Our entomologists will not, for example, track new queens if any are captured as they are unlikely to return to a nest, but instead will attempt to locate a mate. Even if no other hornets were to be found, WSDA will continue to trap for at least three more years to demonstrate the area is free from Asian giant hornets.

WSDA’s Pest Program still hopes to eradicate Asian giant hornets from the Pacific Northwest in cooperation with our neighbors to the north in Canada. The effort will take require international cooperation, research for better detection tools, and the continued work of vigilant observers from the public to prevent Asian giant hornets from gaining a permanent foothold here.

If you may have seen an Asian giant hornet in Washington State, report it with a photo if you can get one at:

If you believe you have seen an Asian giant hornet but live in another area, please report it to your state or province’s invasive species managers. 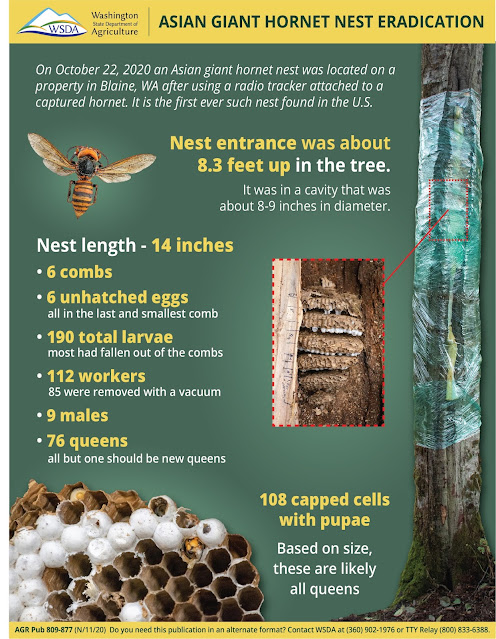 Additional photos of the nest examination can be found on our Box account. When using the photos, please credit the Washington State Department of Agriculture. You can also watch a recording of the press conference on YouTube.
Posted by Karla Salp at 11:40 AM